Sofia Nunes (SN): Let’s start with your identity. Who is Claire Fontaine? When and under which circumstances did she emerge?

Claire Fontaine (CF): Claire Fontaine is a shared space that frees us from the traps and the constraints of authorship, it gives us the freedom of de-subjectivization, of not having to correspond to one’s biography. We created this artist in 2004 in Paris.

SN: How do art and theoretical writing coexist, negotiate and differ within your work regarding the politics that each of both practices comprehends on their own?

CF: One of the specificities of Claire Fontaine is precisely this coexistence between visual and literary, theoretical space. Contemporary art is a space of absolute freedom and it allows for experimentation with any medium, including writing. The politics of the different medias are the same: the aim is not domination and imposition of one’s supposed excellence over the more mediocre players in the system, the aim is to think with freedom and all sort of tools about subject matters that are difficult, dismissed, problematic, or outside of a moralistic or politically correct frame.

SN: A hundred year has passed since Duchamp reversed a urinal and called it art. What does it mean to Claire Fontaine to use the readymade today? What new possibilities do you find in this strategy?

CF: The readymade is a gesture that points to the miracle of human intelligence and the magic hidden in a banal object or situation. Duchamp did say until the end of his life that the infrathin was some sort of magic that couldn’t be explained, and we agree with that — it’s a form of subversive re-enchantment of the world. We work also a lot with hijacking and expropriation, rather than appropriation. We play with the reverence towards the reference that we all feel, and the need to have an existential use-value for each content or form that we feel interested in. Possibilities are infinite for these practices in a world where everything seems to have been already done and said — everything is “already made” so why bother with the new? Let’s try the intense, the exciting, the irreverent.

SN: Art History is being appropriated by your feminist sensibility that keeps assaulting what you call “toxic masculinity”. We know that neoliberal societies learned to be more morally opened and inclusive for the profit of capital, so what set of problems do Untitled (advertising, advertising), 2015, or Untitled (L.G.B.T.Q, shaved), 2017, bring to the fore that in your opinion Art History discourses keep repressing and excluding?

CF: With our work we try to awaken the natural intelligence in each person, the capacity of thinking freely that we often repress for fear that it will cause us problems or losses. Art history — there Duchamp works as a reference with a use-value — will never know the best artwork in the world if it has been made in the deep jungle away from human eyes and the media, it is a narrative controlled by power like all official narratives are, we are not scandalised by it, on the contrary, it would be surprising if it wasn’t the case. We try to focus on the potentiality, the possible, the capacity of people to experience freedom here and now at least in the separate space in which they encounter our artwork, and maybe then they can bring these discoveries in other regions of life.

SN: Claire Fontaine’s work often speaks the language and techniques of the capital, including coins and banknotes, neon signs, PlayStations, billboards, advertisings, merchandising postcards, company logos. “Your Money and Your Life” exhibition is not an exception in this matter. Would you agree that “art should absorb its enemy, even the most mortal one” (I am quoting Theodor Adorno) in order to resist or criticise it?

SN: We are not big fans of Adorno, there is too much morality in some of his analysis. In our artwork we are doing what artists have done since the first painting on the Lascaux walls: we are talking about our environment, our landscape, what surrounds us on a daily basis in the urban space and on the internet. The commodification of the world was already well advanced when Debord wrote and filmed The Society of Spectacle, now we have reached another level of it. But it must be underlined that we describe what slips through the cracks, what disturbs us, what looks like something familiar but isn’t. We don’t believe in shocking our spectators, life is way more shocking than art could ever dream of being these days. We try to create the conditions to question daily objects, images and situations by presenting them in another context where we can take the time to question them or their hijacked versions.

SN: In this exhibition it’s just as if the commodity form precedes not only the objects but also the subjects. But you don’t see object and subject as separate entities once they interact with each other. Considering your magic illusionist Living Statues, how do they fuse living forms and petrification, and what problems do they pose to that contamination?

CF: Commodification does potentially envelop everything nowadays. We do make an enormous difference between subjects and objects. The Living Statues are objects that pretend to be subjects that pretend to be objects. They tackle partly playfully and partly painfully the self-objectification of people but they also talk about creative begging. Begging is seen as the opposite of productive work, but this is a very simplistic reading. Through these works we show that any artwork begs and that without the attention, the love and the care of the viewer the artwork doesn’t survive. Of course the metaphor of the begging street artist sheds a light on the contemporary artists’ condition. These sculptures aren’t self-portraits but they are still-life from the urban context, they compete for attention with the landscape in the gallery and in the city, but of course the accent is on the unseen body of the poor, the foreigner, in disguise under the clothes and the masks, replaced by a mannequin in the white cube.

SN: Several times you have used Giorgio Agamben’s expression “whatever singularity” to address the idea of an emancipated subjectivity forged by art. How do you envisage the potentialities of that “whaterverness” and how do you consider it facing the new emerging identity politics with its specific and defined subjects?

CF: The concept of whatever singularity is amoral, it doesn’t refer to an emancipated subjectivity and it is nothing to do with art. We mention the readymade as an example of whatever object that becomes an artwork and we refer to whatever singularities as the most diffuse form of subjectivity, capable of the best and the worst, what Cambridge Analytica called the “persuadable” and targeted in order to get Trump elected, Brexit voted for etc. Identity politics can take different forms and they are all rather exciting whenever they manage to fight for a specificity of a social or racial group and by doing so they throw it out of the window. To be clearer: Angela Davis says that identity politics find their best context of expression in intersectional politics. The power position that certain groups find themselves in is interesting precisely because it is not essentialist, it can be changed, it can shift by applying pressure, creating a different visibility.

SN: Your recent powerful light-boxes Untitled (Naked after beating) and Untitled (They sexually harass and torture, then photograph and publish), 2018, visually addresses the brutal violence committed on the Yemeni prisoners. The images were taken from mobile phones with cracked screens. Which technopolitical resonances can we find in the clash you make between cracked images and digital circulation? It seems like a broader witness also takes part in this particular group’s wound…

CF: There is definitely a reference to the fact that, once reproduced and blown up as an integral part of an image, the accidental crack becomes irreparable. It is printed on the same plane as the photograph that the broken screen shows, but it is somehow at a higher resolution because it is “real”, its presence doesn’t come from a group of pixels although it is transformed into one by the camera that captures it. These works refer explicitly to the darkness of prisons, their being offline and physically as much as psychologically destructive. They portray something that almost we can’t look at, although it is a just drawing of the brutality that happens far away from our eyes, but are we really wanting to look?

SN: When our empathy with non-human living forms, such as plants and animals, already reified like humans, increases, Claire Fontaine speaks about the lack of empathy between humans, see The luxury of making sense (text pile), 2018. How do you see the need of inter-human love and friendship together with the ecological human-decentred critique of biopolitics? Is this a question for you?

CF: This is indeed the most important question for us, the question of communism conceived as a form of coexistence of human and non-human life on earth, based on values that exceed the monetary translation of every resource into cash and take into account all the priceless factors that make our survival possible. The day we will stop looking at each other in an instrumental way will be the day we will start seeing nature like a complex and miraculous ecosystem that isn’t only a reservoir of food and energy. The luxury of making sense is a text that speaks about a specific idea of love created and transmitted by a certain social class, it mentions the mirror neurons and our selective empathy but most of all it underlines the fact that having a coherent and dignified life is already a form of luxury.

SN: No future, Sex Pistols said. You say No present. The projection of futures gone with modernity and our uninterrupted global times steals the present from us. With what temporality do you dream?

CF: Our neon signs aren’t declarations of our intentions. They are crystallisations of ideas and phrases that circulate in our time. No Present refers, in its ambiguity, to an ungenerous contingency of austerity and solitude, which has been everyone’s usual experience since 2008; but of course it does pinpoint a time where everyone has in their pockets all their friends, family, colleagues, lovers and acquaintances texting them, emailing them, confiscating their attention from the present moment that slowly crumbles down. The more under surveillance we are, the less the present exists. An intense present doesn’t take place when we are all connected but when we can say collectively “we” and maybe switch off our phones to be just with the people that we can see and touch right now. That’s the temporality we dream of. 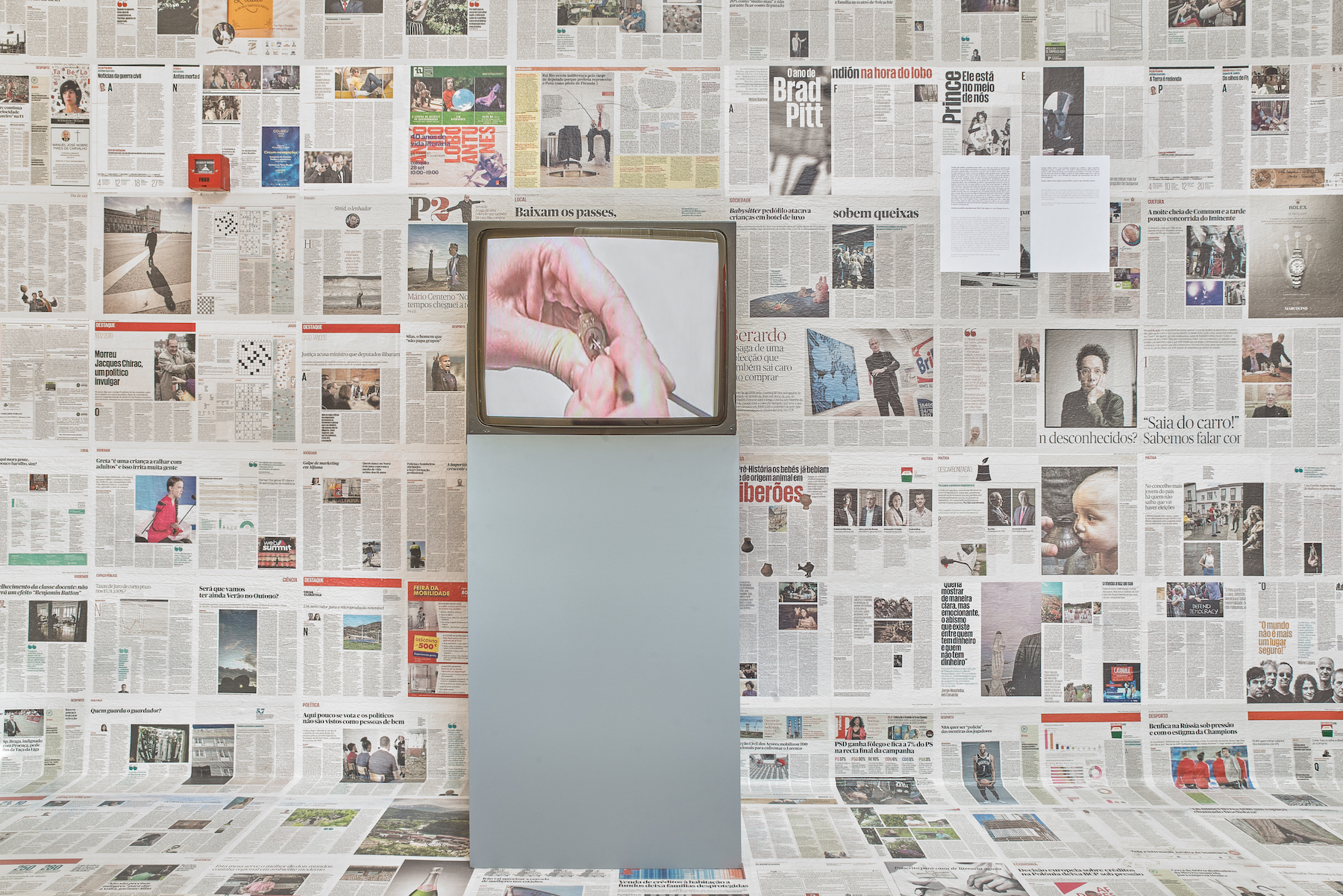