André Romão’s practice materializes in an image the flow of reality captured or brought back to the stage that precedes its crystallization in convention, to the moment in which it is not yet declined in a certain category, in a genre or has taken a precise direction of development that makes it recognizable and definable. In this suspended dimension, the potentialities inherent in an object, material or natural element radiate all around his works, expressing their maximum tension. This fluid and unpredictable reality, open and reversible, is nourished by literature, poetry, and the imaginative power of myth, particularly in relation to a special ability to perceive and relate to nature and to distill a narrative into an image.

Mainly articulated in sculpture, installation, video and posters, Romão’s work combines different materials, words, temporalities and perspectives that give life to a world in which man is no longer at the center. An upside-down world where plastic sweats, and wooden sculptures become trees again.

The dimension of artifact, manufactured object and product of nature here coexist—it is not clear where one ends and the other begins—evoking that natural inclination of thought towards enchantment and amazement, open to metamorphosis and ready to catch the manifestation of the supernatural in everyday objects. After all, Naturalia and Artificialia after long gone hand in hand under the name Mirabilia.

Sara De Chiara (SDC): I would like to start with a question about your relationship with Italy. You speak Italian, you have started to collaborate with Galleria Umberto Di Marino ten years ago with your first solo show, Barbarian Poems (2011) and your last solo, Le volpi, is on view in Naples until the end of July 2021.

You often travel to Italy with the purpose of exploring every corner of the Country, even the not obvious destinations. I want to ask you if and how Italian landscape, history, art and traditions inspire your work.

Or rather, is your work nourished by a more generic idea of antiquity and classics, that is independent of individual countries/cultures?

André Romão (AR): It has nothing to do with a generic idea of antiquity and of the classic. Most things I’m interested in I perceive them – even if they are thousands of years old – as alive and vibrant and pretty much here and now. When things resonate with you on a very deep level time is very irrelevant, I don’t think I make much distinction between things written yesterday or centuries ago.

I was always a big art history nerd and always very interested in literature. Going to Italy was a way to be near things that were close to my heart, from Piero della Francesca to the history of Italian Autonomia, from Arte Povera to the Etruscans. I needed to follow these passions, and I was lucky enough to be able to do it.

SDC: What in ancient mythologies (but also legends, apologues and hagiographies) of various cultures appeals to you? And what do you expect from their fusion/juxtaposition?

AR: Well, ancient mythologies excite me as much as any recent construction of collectiveness, but I’ve always been more interested when such constructions occur in the realm of literature. Poetry is very important. When it comes to ancient mythologies two books have had a really big influence on my work, The Metamorphosis of Ovid on the one hand and the Strange Tales of Pu Songling on the other. In different ways, both describe a fantastical view of the world where the borders between entities are less fixed, and the rules of nature, life and death, culture, class and gender can be suspended. Where transformation and hybridization are permanent and the relationship with nature is absolutely different from ours.

I was never too attracted to exact thinking or fixed borders, it is always more fascinating when someone can make love to a lake or your neighbor turns out to be a Fox spirit.

SDC: In addition to its clear literary and mythopoetic matrix, does the idea of hybridization and metamorphosis have a scientific biological reference?

AR: Of course, all that my work does is to propose a reality that is somehow analogue or parallel to the world that exists, not to avoid it... I’m aware of it and very worried about it. A lot of what I do is my very own response to how much it affects me emotionally. When I’m talking about borderless fluidity is also because I’m really disturbed by race, gender and class issues in the world and I cannot understand them, coping with them is hard, feeling the hate closing in, and extraction exhausting the earth. You have to imagine a world where you can become a tree, love is free, the past is not forgotten and an animal is treated as an equal.

SDC: Is there a difference for you in taking/appropriating an image from the past (I’m thinking of reproductions of details of paintings on your posters) and using an actual art object from the past (I am referring for example to the sculpture Innesto / Grafting (2021) or the antique Egyptian and Greek statuettes and Aryballos displayed in the grab and go fridges in your solo show from 2009, Fauna at Museu Coleção Berardo in Lisbon)? Are they two different degrees of updating and betrayal of tradition?

AR: I try to work with as less hierarchy between things as I can. Objects, beings and ideas should be horizontal but at the same time keep their specificities and the qualities that make them special. They are not indistinct. My appetite for appropriation has to do with a lot of things: I always felt the overwhelming presence of time, not only historical, but also geological, I do use sculptures in my work but also stones, before a wood carving there was always a tree. And that for me is important, it makes you feel small. No one ever starts working from scratch, nothing is created out of the void and maybe I just make it very clear in my work.

SDC: In a recent interview, you mentioned a book by Dario Gamboni, The destruction of images, in relation to the fact that each generation has to “destroy” the previous one to express its own original point of view. Gamboni is also the author of a beautiful book about ambivalent images. “Ambivalence” is one of the characteristics of your practice, as in front of your works, it seems to witness a short circuit: fusion of different temporalities, past and future, of perishable organic and artificial aseptic materials, rough opaque and transparent polished surfaces. Under what principle does the encounter of these opposites take place?

AR: Encounters are what sparks and ignites creativity, this idea is very important to me, in all its variants. Body meets body, person meets ghost, bird meets lake, idea meets idea, wooden sculpture meets plexiglass, vandal meets object. Encounters are essential, chance encounters even more. It is what generates tension and starts producing something. I can remember very beautiful encounters in my life but also terrifying ones. Everything produces meaning: Agriculture meets poetry, engine meets bee. Agents have to care for each other, care is important, people should care.

SDC: I would like to ask you something about the display: the sculptures presently on view at the Liverpool Biennial are installed on an irregular base / stage. The presence of rows of posters announcing the show as part of the show (as for the above mentioned Le volpi and Fauna, as well as for Raposa that just inaugurated at Casa da Cerca in Almada) produces another weird short circuit, as they seem to refer to something performative, temporary in nature, to cinema or theater. Are the elements in the show playing different roles in a pièce? To what extent are the display and communication of the exhibition project part of the same project?

AR: I really like this idea you talk about in the question, the weird short circuit that creates a sort of performativity, I’m stealing this idea from you from now on, I think that is exactly what the posters are. Posters are important for me, as they address temporality, I always liked posters, makes me think of the posters for small concerts, xeroxed and glued on the streets.

Stages are also important as they convey action, even if very stylized and codified. Noh theatre is a big reference for the way it presents encounters, narratives are extended and entities don’t need to exist on the same plane, it was a magical experience. Artaud and Grotowski also influenced my work a lot.

I tend to use stage-like plinths for my works lately, I want these spaces to be meeting places for the different entities the sculptures and poems evoke.

The Monster Dresses in Mirrors 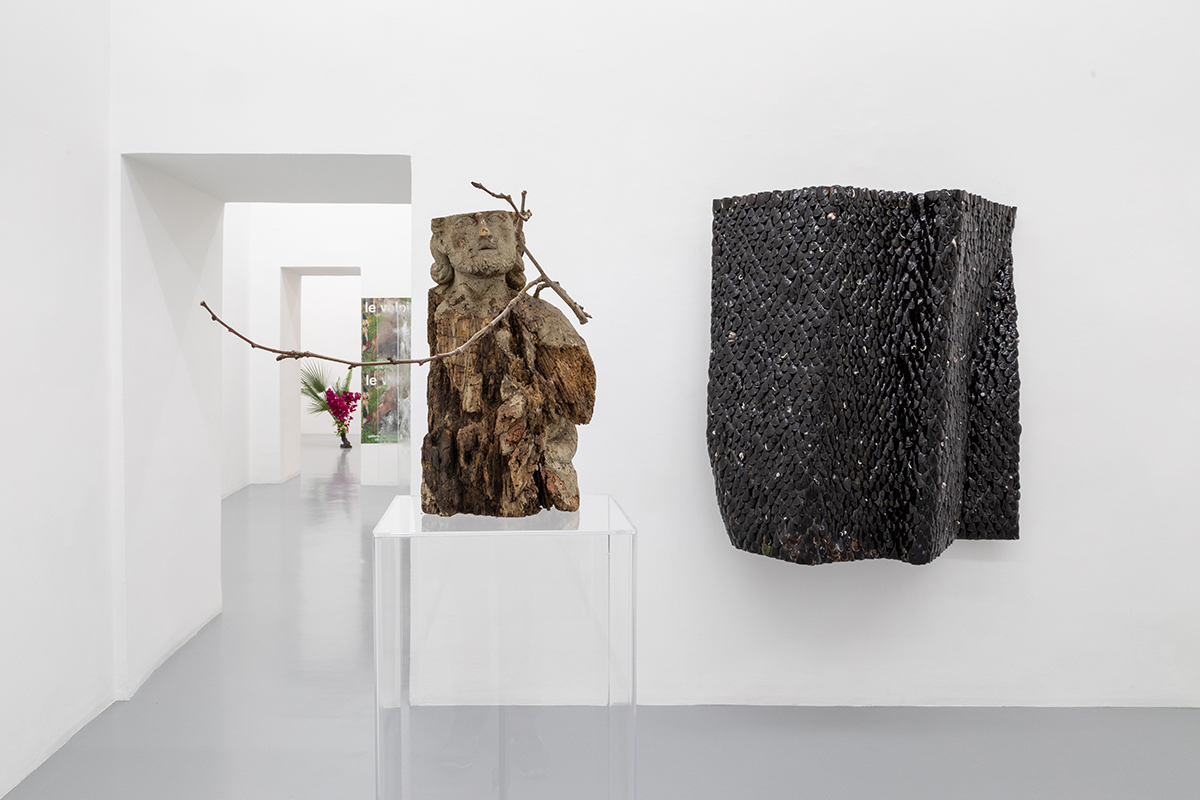 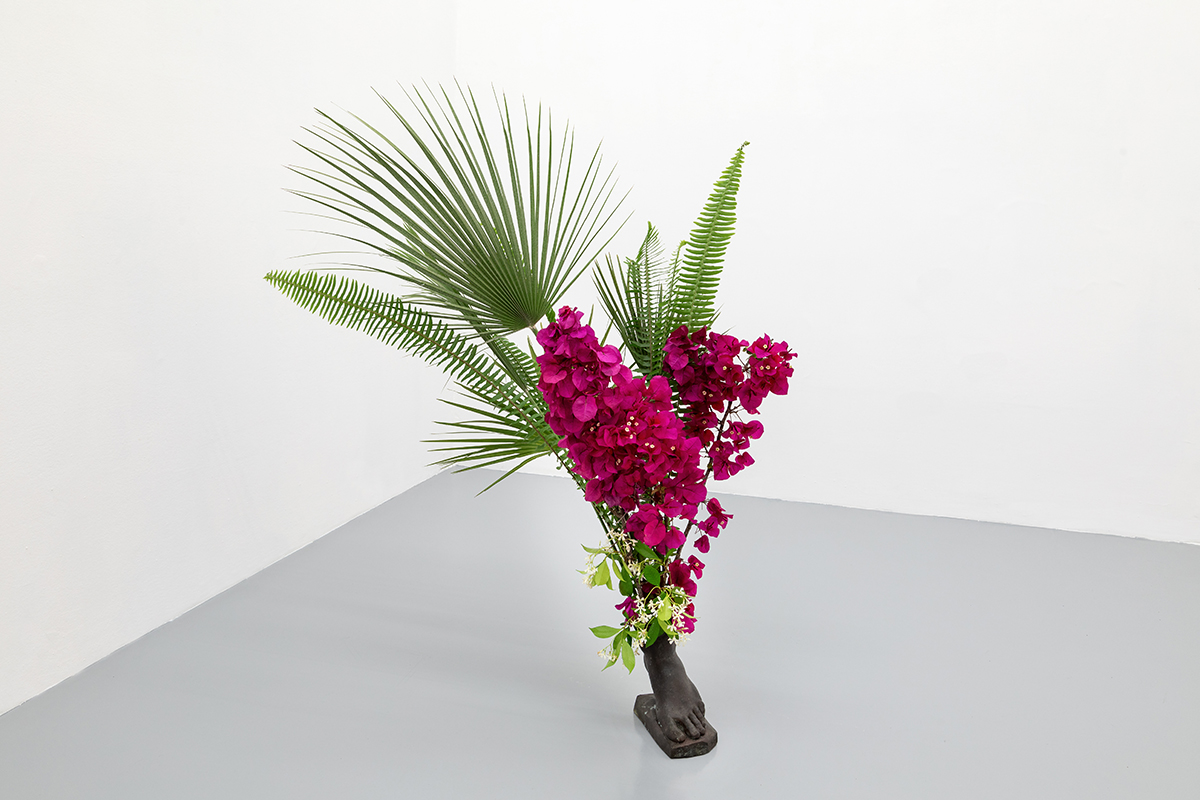 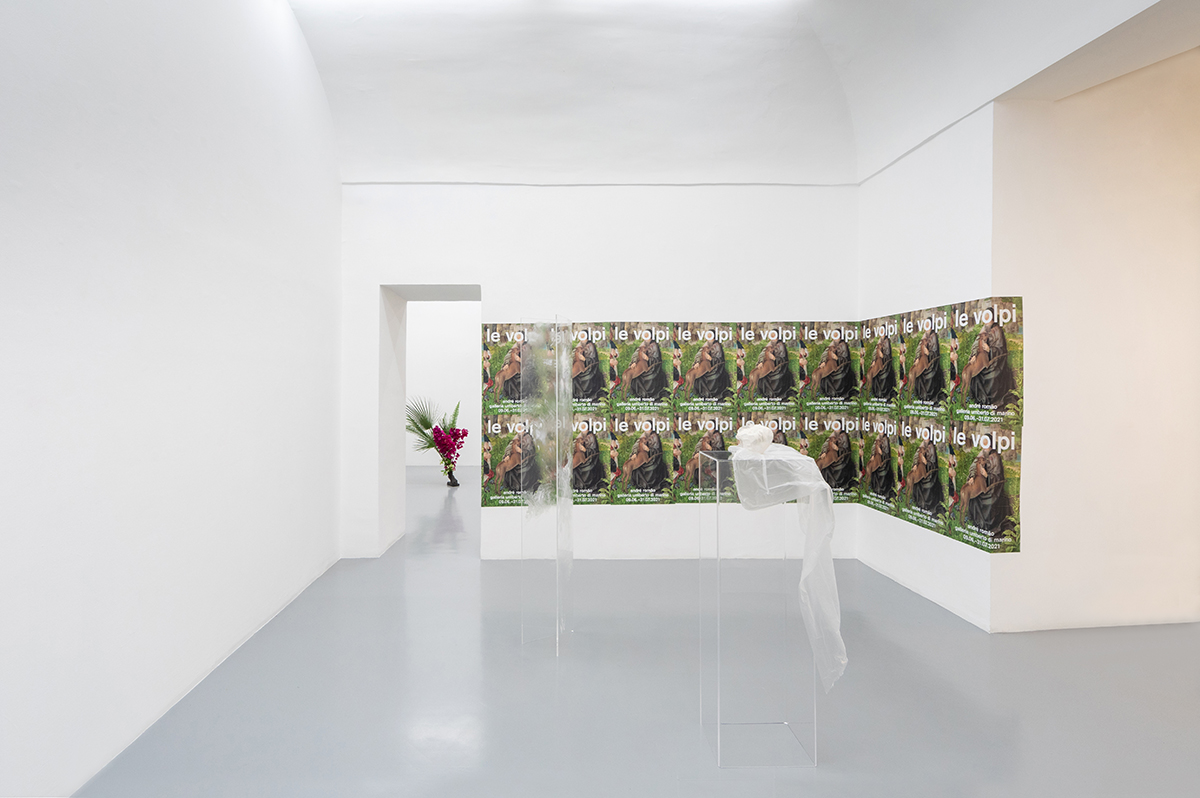 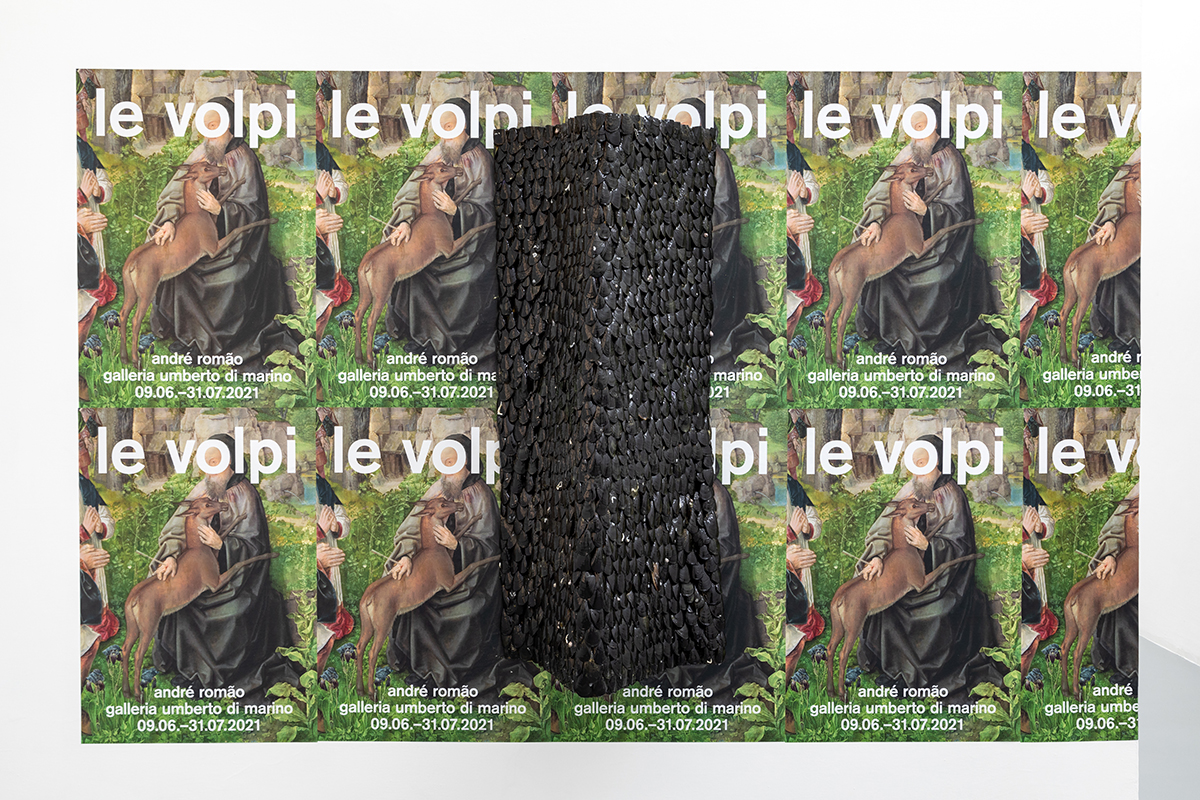 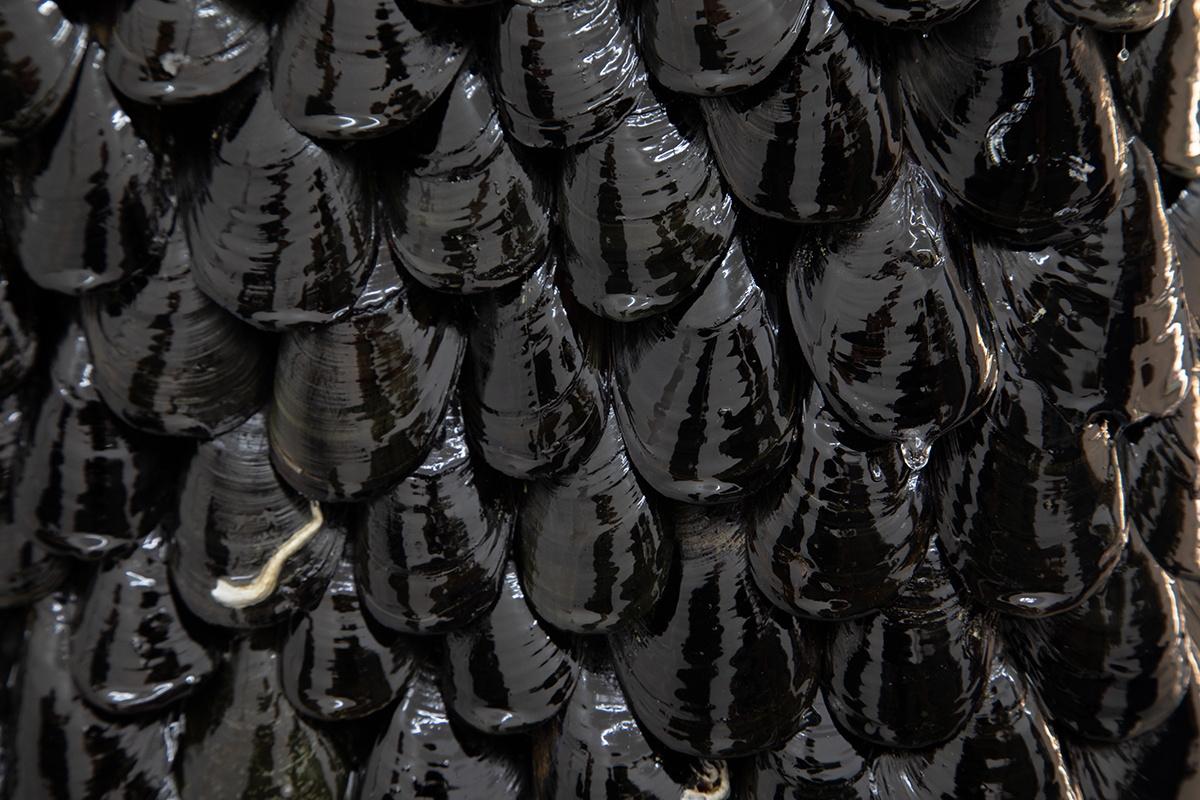 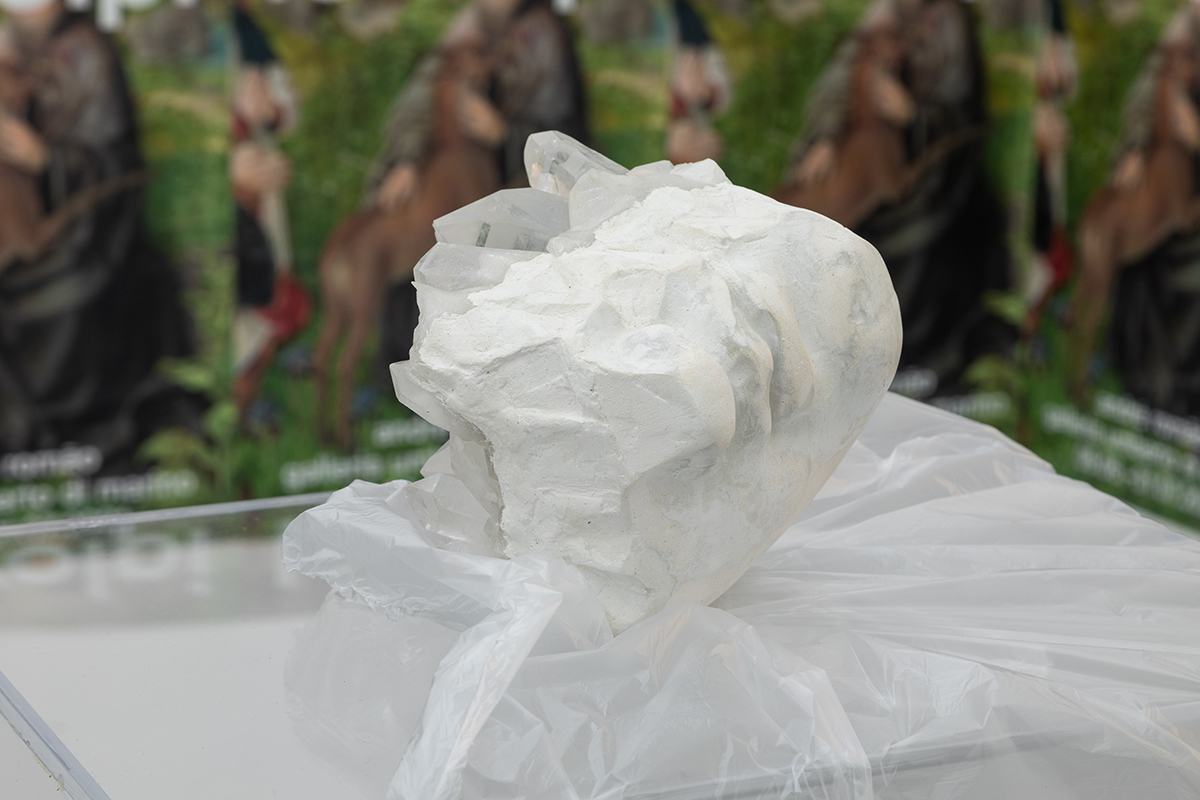 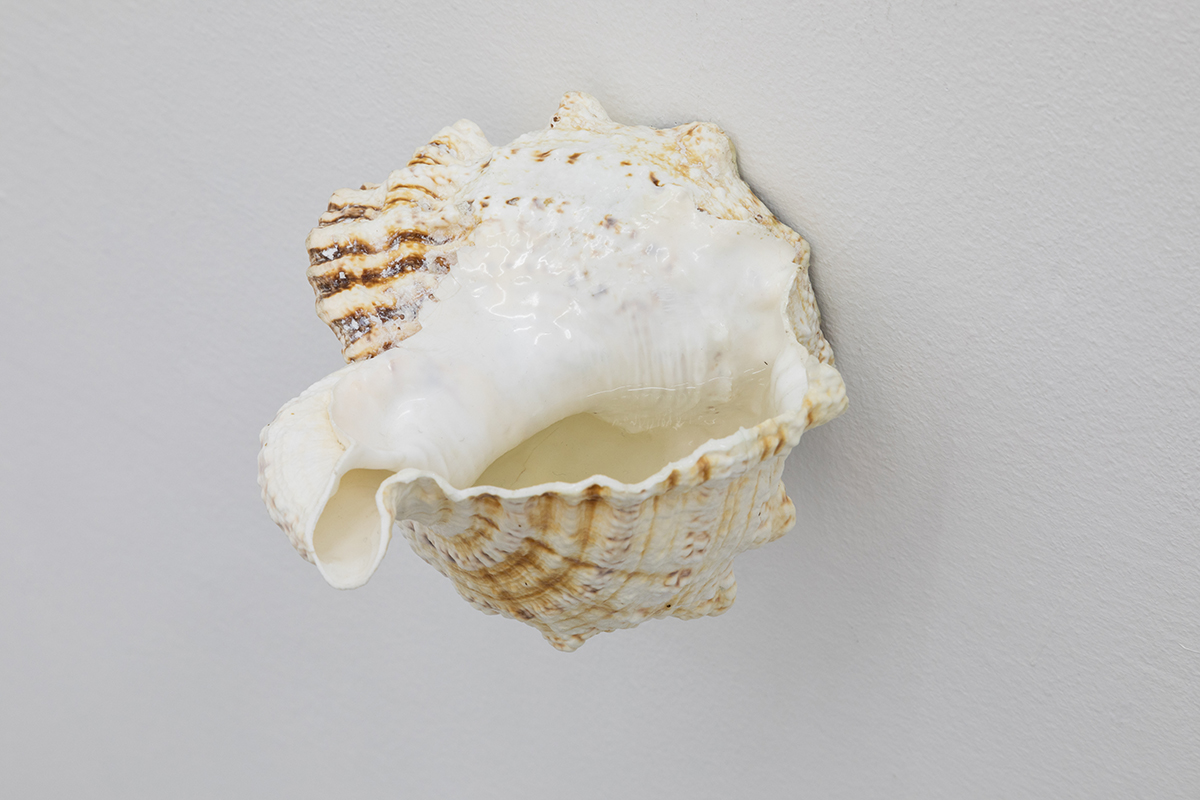 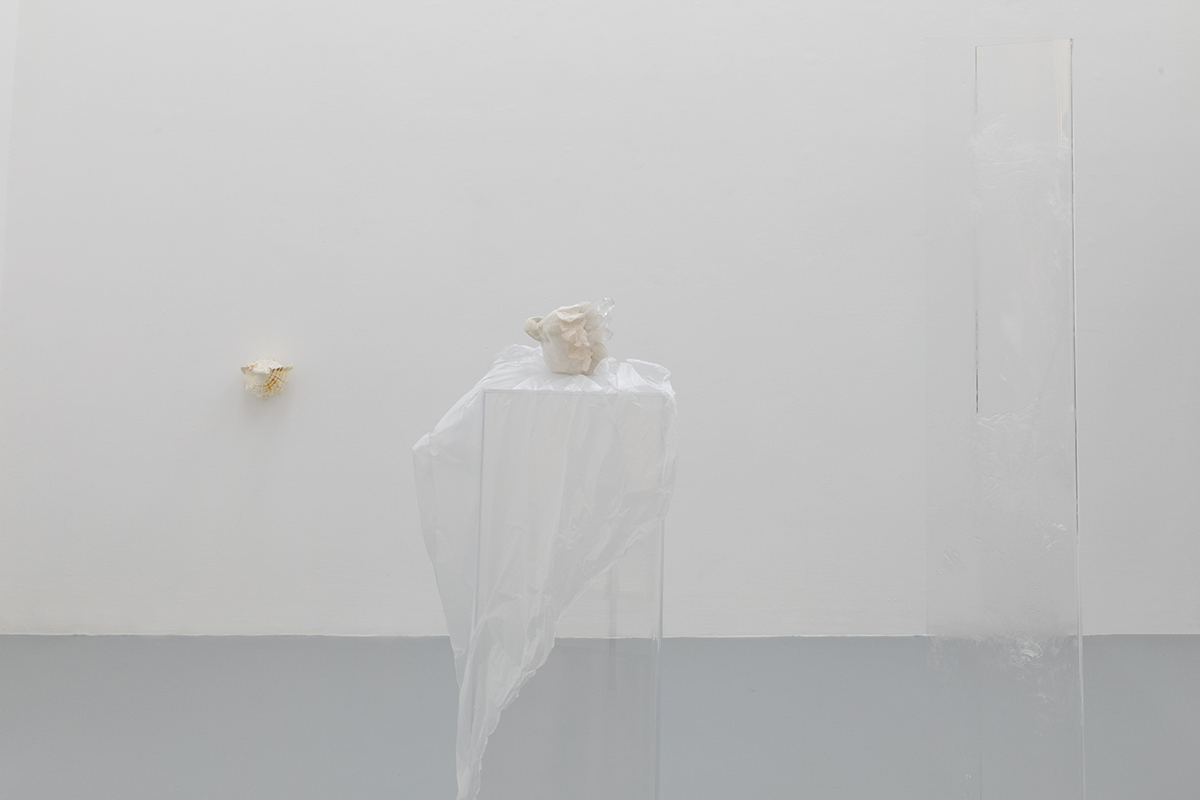