Estás vendo coisas, the first solo exhibition by the double act of Bárbara Wagner (1980, Brasília) and Benjamin de Burca (1975, Munich) in a Portuguese institutional space, opened in mid-January. Held at Galeria da Boavista, in Lisbon, it had to be closed a month before scheduled, like so many others in the whole world, as authorities attempted to control the COVID-19 pandemic. From 6 to 12 April, Estás vendo coisas (2016) was available online, an initiative promoted by the artists with the Municipal Galleries of Lisbon.

Working partners for seven years, the double act's production oscillates fluidly between different universes. Their videos and photographs merge codes of visual art and cinema with the aesthetics of mass media, social media, and YouTube.

Bárbara was born in the Central Brazilian Plateau, in the country's capital. Benjamin, in Bavaria. The exchange of experiences, listening, and a shared making are fundamental to their practice. Their works blur the boundaries between fiction and reality, and are entirely created in close collaboration with their "protagonists": individuals and groups that regard dance, music, and other artistic, cultural, and religious forms of expression as a means of affirmation and construction of identity, as well as a possibility for their existences. Documentary, fantasy, and imagination mix together to suspend and expose prejudices and bias. From contemporary displays of the consumer industry and pop culture, the artists reveal and defy conventions of good or bad taste, and present art and culture as platforms and tools for social integration, self-representation, struggle, and resistance.

On the ground floor of Galeria da Boavista, Wagner & De Burca present RISE (2018), shot at a Toronto subway extension that connects the centre and the outskirts of the city. In the form of a musical, the video plunges into the social and cultural context of a group of young first- and second-generation Canadian poets and musicians, most of whom descend from African and Caribbean immigrants. Developed in collaboration with its protagonists, RISE constructs a self-portrait of this group as it poses questions related to belonging, freedom, identity, and the power of words. The acronym that titles the work, "Reaching Intelligent Souls Everywhere," is the name of a movement created by Canadian poet Randell Adjei. Constituted by historically marginalised portions of the city's population, the movement has since 2012 promoted several meetings regarding the spoken word practice and the concept of edutainment—a mix of education and entertainment. Poetry and music are employed to share personal experiences. Six years after its foundation, the initiative became an expanded platform of art, collective querying, and resistance.

Estás vendo coisas, the video work which gives name to the show, portrays the universe of Recife's brega music—a fusion of hip-hop, techno, and reggaetón—the music video industry it fuels, and the desire for success it generates in a number of people. While being informally used to define pejoratively various forms of mass-media popular music made in Brazil since the 1970s, "brega" indicates a cultural scene of resistance on the outskirts of the capital of Pernambuco. The images of Bárbara and Benjamin bear witness to the ability of this musical expression to overcome socioeconomic barriers and inhabit the soundscape of a city populated by inequality and discrepancy.

A single-channel screening of Swinguerra (2019), the video installation with which the artists represented Brazil at last year's Venice Biennale, was presented in Lisbon in a special session at Cinema São Jorge. The work follows the rehearsal routine of different groups dancing to the rhythm of swingueira, funk brega, and batidão do maloka. With origins dating back to the country's cultural traditions, these are popular phenomena from the outskirts of Recife that nonetheless operate outside the mainstream. In front of the camera, the young dancers—many of whom are black and transgender—construct performances of themselves, reveal the knowledge they carry in their bodies, and self-affirm with a mix of swing and fight.

Benjamin and I talked about the show at Galeria da Boavista and the act's practice. 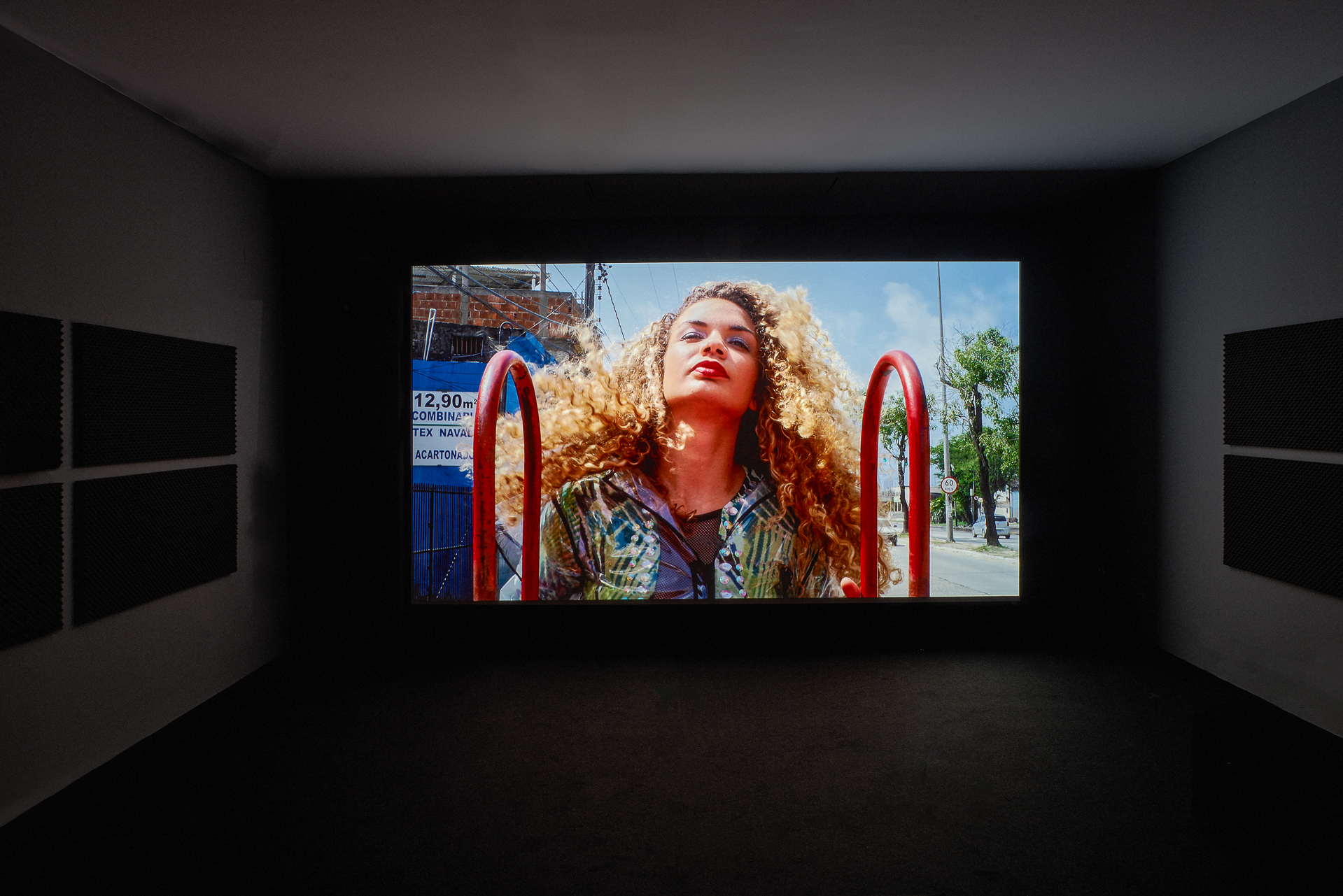 Isabella Lenzi (IL): Besides questioning conceptions of high and low culture and putting the idea of good or bad taste at stake, you introduce a number of other queries connected to themes such as gender, class, and cultural industry.

Benjamin de Burca (BB): As a form, music is a quality lens to discuss today's socio-political issues. It is unlikely that we do not discover and recognise ourselves as we listen to a song, since musical forms carry matters of class, taste, race, gender. Cinema, however, is what can give them visual form. Image and sound united have the ability and power to display and crystallise the issues to be considered and the arguments and positions to be adopted.

IL: Your works, even though they approach these more universal issues, are particularly attached to specific contexts. How dissimilar are the reactions in the different countries/locations where you have presented your works? On the Lisbon exhibition: what was the criteria for selecting the works?

BB: Our films work against the idea of borders, and it's curious to see how each country's local cultural and political atmosphere defines the reaction to our works. Context can simultaneously affect the way the work is read and reveal certain particularities of the place where it's shown.

I was curious to see how these films would be received in Portugal. I have always found it interesting that, on account of cultural distance, aspects which may seem obvious to a Brazilian spectator—particularly as regards Estás vendo coisas—become subtle to a German or Swiss viewer. When we presented the film at the Berlinale and the Fotomuseum Winterthur, I noticed the audience found it to be commemorative, rich in colour and dance, while in Brazil it has acquired a melancholic reading, posing questions related to class division and social empowerment.

Due to space limitations, in Lisbon we opted to present two works only and show Swinguerra, which is a complex installation, in a cinema. We had never shown RISE and Estás vendo coisas together, and we were interested in displaying two films that address pop expressions as modalities of artistic expression: hip-hop and brega. Estás vendo coisas reverberates with the city's audience, and not only because it's a film in Portuguese. For there surely are equivalents of this musical expression in the Portuguese context, it is a recognisable work. Hip-hop, on the other hand, finds echo in most countries because its rise was more universal.

IL: You question the notion of "giving voice" to minorities and marginalised groups, and develop your works in collaboration and dialogue with the people that feature in them. Can you talk us through the process of approximation to those "protagonists"? What is usually the reaction when you explain what you do?

BB: How can we give voice to people who have more than 100,000 followers on Instagram, or that regularly perform on stage in front of thousands of people? What we do is collaborating to construct forms of representation. We do not give voice at all, since the artists we work with already have strong networks wherefrom they create and spread their image, ideas, creativity, and sense of individuality. Most of them share their own music or dance videos online and perform on various platforms and local stages. What we offer is another platform for exposure, one different from those they are already acquainted with and have access to.

Our films are subject to the specific conditions of whom we work with. There is a great difference between the evangelical singers from Terremoto Santo (2017) [another work by Bárbara and Benjamin] and the dancers from Swinguerra as regards their everyday lives and living standards. Naturally, we need to adapt to their conditions and habits in order to get closer to their interests and routines.

We usually spend a lot of time in the company of whom we'll eventually work with. During that period, bonds and mutual interests are naturally created. All starts to take shape when we share ideas and the way we wish to develop a specific work. The life and routine of these people in that exact moment are at the basis of our films—and this "present" often seems to have come from a fiction film or a novel.

IL: Where does reality end and fiction begin in your films? Furthermore, what is reality and what is fiction as regards the development of the works?

BB: It's like in life. The artists who participate in our productions must fully recognise themselves in the works. These films are portraits, so the boundaries between reality and fiction are defined insofar as people recognise both their internal and external—private and public—personalities. This is the fundamental premise of the portrait. There is a sort of contract or pact between the portrayed and the portrayer to construct a physical and psychological portrait that does justice to said individual or group in a given, present moment.

IL: RISE was directed in Canada, a context distant from Recife, where you've worked so many times. In what consisted the process of research on and acquaintanceship with this place?

BB: Distant cultural and social contexts can be found just around the corner. You don't necessarily need to travel to another country to find differences; but as we take part in it, observe, try to learn, discuss it, and finally create, we share our differences and assemble our similarities.

IL: You have stated in other interviews that your works do not necessarily represent what's on the margins. Sometimes—and this is precisely an aspect of your work you like to highlight—the cultural manifestations you depict are central to some contexts but invisible to others, or an object of much prejudice. Could you comment on it?

BB: Once, after a difficult screening which was received with loud applause and equally loud jeering, I said to the divided audience: "Cinema allows for our prejudices to appear to ourselves." Cinema as a medium is a space for negotiation of class and taste, and sometimes it can also be a mirror that shows us said prejudices precisely. I believe our films can have that effect on the audience. People "see" themselves in them, and this is not always an agreeable image to behold.

Isabella Lenzi. São Paulo, Brazil, 1986. Independent curator, editor, and researcher. She directed the cultural venue of the Portuguese Consulate-General of São Paulo / Camões I.P. for seven years (2013–2019), where she established a space of debate and experimentation for emerging and historical, Portuguese and Brazilian artists. She was also part of the Associação Cultural Videobrasil programme team (2013–2015). She had previously worked in exhibitions at Galeria Vermelho, in São Paulo (2012–2013), and was curatorial assistant to Agnaldo Farias at the 11th Cuenca Biennale, in Ecuador (2011–2012). She has been living between Brazil and Europe since 2016. She worked as researcher and curatorial assistant at the Whitechapel Gallery, in London (2017). More recently, she collaborated in projects from the Nouveau Musée National de Monaco (2018); and the PAC — Padiglione d’Arte Contemporanea, in Milan (2018). Currently, she is exhibition coordinator at Fundación MAPFRE, in Madrid, and has just been selected in open competition for a research fellowship at the Departamento de Colecciones del Museo Nacional Centro de Arte Reina Sofía — MNCARS, Madrid. 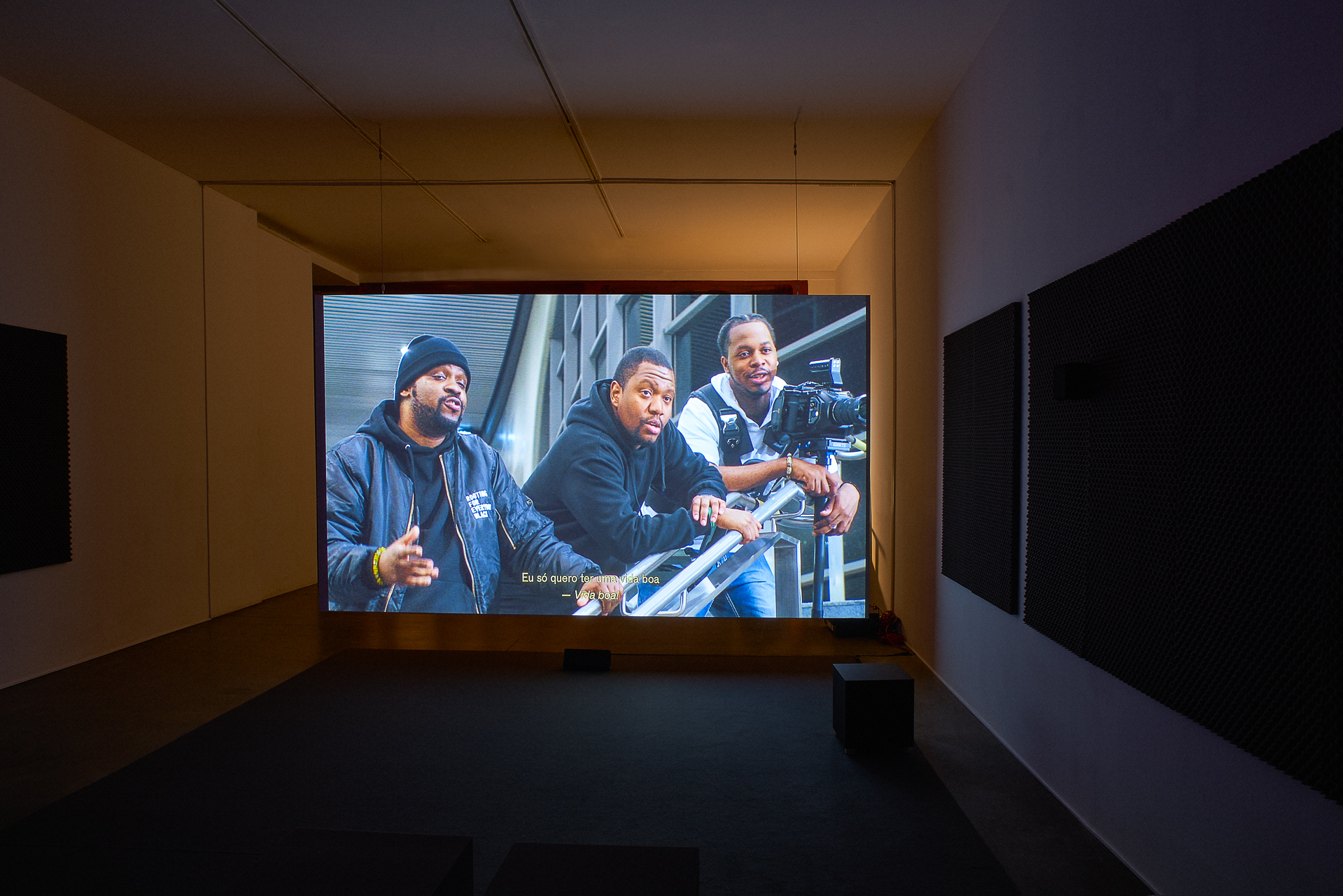