March 12, the day I visited Galeria Filomena Soares. The opening of Pedro Barateiro's and Sara Bichão's exhibitions, which was scheduled for the night, had already been cancelled. The circumstances—we all are aware and live the daily hesitations and anxieties of them. Few were the moments when the exhibitions were entirely open to the public before the gallery's eventual closing down. On that same day of March, the Portuguese government would declare state of alert, and the movement of paralysation almost the whole country sank into would begin.

Currently, in writing about Abismo, the title of Pedro Barateiro's exhibition, I resort to the distant remembrance of my encounter with that space, availing myself as well of the digital substitutes here too available. Memory-writing-record: an ensemble which, in itself, will not digress from what an exercise of this sort would expectably propose in this magazine; nor will it ruthlessly cause the unfolding of the reading experience as regards the exhibition commented on to differ. What has changed is one's awareness that no muscular movement of any sort might now head towards the physical space Abismo has not yet vacated. 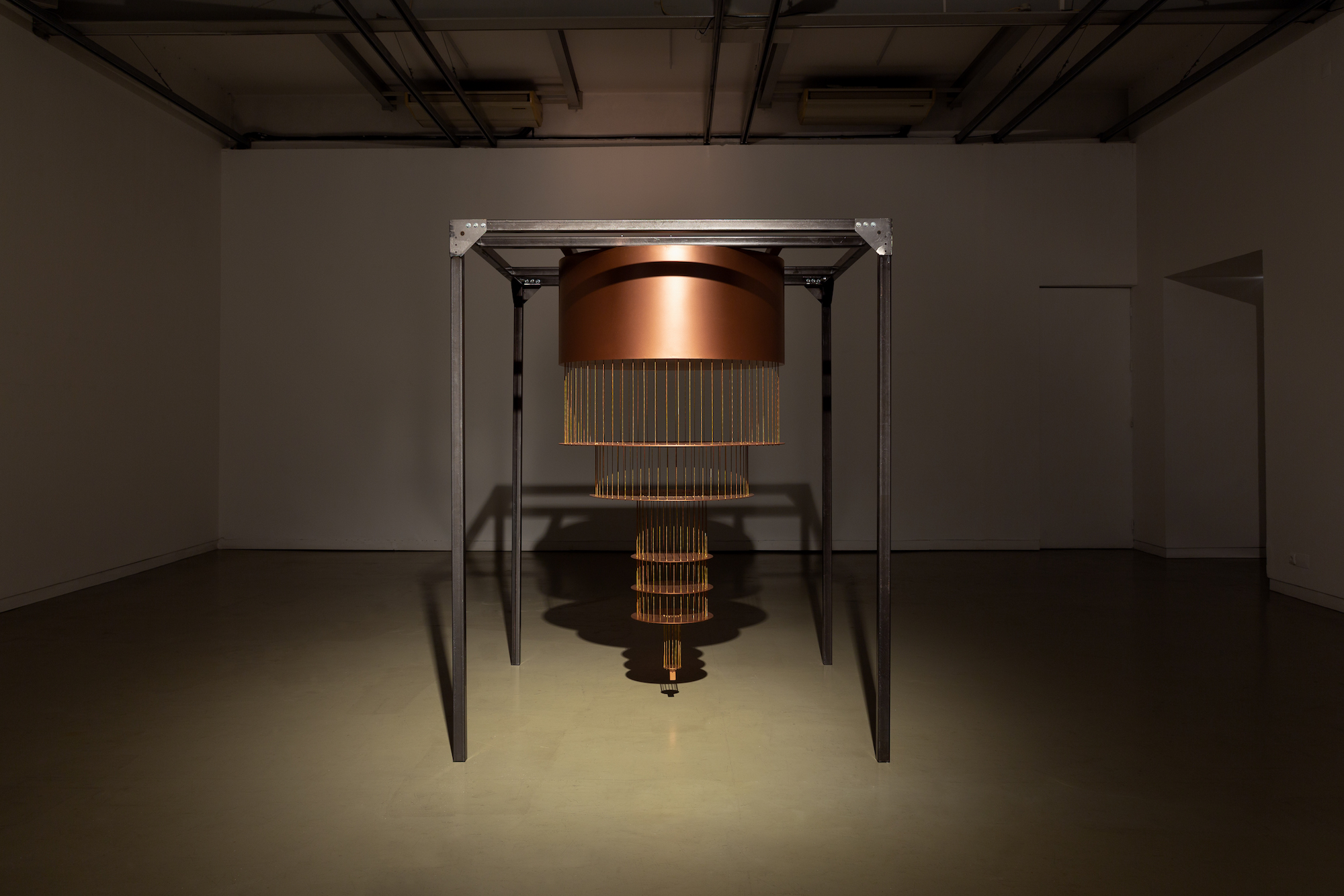 Deprived of visitors, this exhibition solitarily and unexpectedly experiments that which was one of Barateiro's intentions as regards the conditions of possibility within its relational experience: a certain “suspension of space and time.” Fatally, but not due to any aesthetic-artistic contingency (or perhaps exactly due to the aestheticising directions that filter the current context), that is the state of spatiotemporal slurry consuming us now, alone as well, in the comfort of our sofas (for those who are privileged enough to stay there).

Though unideal, however, the latter might be a productive place to focus on that other—more unstable, more rebellious, darker, or paradoxically brighter—which Abismo segregates, notwithstanding the postponement of images (sound surely being part of them). Curiously enough, the current state of Abismo concretely nears one of the dimensions of reality that Barateiro's large sculpture summons up. As this sculpture is inspired in the configuration of a quantum computer, its confinement is dramatically highlighted by the fact that the technological device it stylises requires a scrupulously stabilised, interference-free space for its actual functioning.

Resembling a chandelier's shape, the image of the quantum computer casts the first light upon the discourse Pedro Barateiro intends to elaborate on. The device—which, as far as is known, owes more to a theoretical promise than to an effective technical realisation—is envisaged as capable of processing an exponentially larger amount of data in comparison with today's most advanced ordinary computer. In order to achieve so, it employs the basic principles of quantum mechanics, which integrates the possibility of simultaneity of two distinct states of matter—the so-called quantum superposition. Forgoing overly scientific details (which I have not mastered), it is pertinent to mention that the consummate advent of this computer would allow for, e.g., not only a wave of unimaginable medical and pharmaceutical breakthroughs but also an outstanding AI development or a remarkable power over data control and its security systems. Such a computer, therefore, is the image of a possibly auspicious technological future as much as it is the face of a strenuous strife for domination of quantum supremacy that has already been set off by great sovereign powers and big tech. In a silent, obscure way. Like the Cold War arms race.

From the quantum vocabulary, let us keep in mind the aforementioned word: superposition. It could at once describe the compositive gesture of Abismo, as well as the poetics and the poiesis that fuel the totality of Pedro Barateiro's work—to superpose. Superposing to decompose. To arrive at simpler units, to elementary intensities. To approach the invisible, hardly penetrable thread which, through its practice precisely, we perceive as uniting distant subjectivities and apparently contradictory materialities; realities beyond the artistic scope which yet contaminate and condition it. I think Barateiro would call that thread "spirit revealed," recalling once again an unrelated Ana Jotta quote that has punctuated his work: "An artist is a spirit revealer."

Abismo does not escape such premise, even though the latter does not become realised in some vocabular manifestation. Instead, it is materialised with particular latency, owing it both to the sculpture and to the soundtrack and poster, which comprise the whole of this work-exhibition. Superposition is naturally achieved not only through the differentiated set of means employed, but chiefly through the conceptual layers each element articulates in and between themselves. A singular unity between different modes of administration of human experience is thus devised, by means of which the individual individually or collectively establishes their relationship with the world.

Technology, economy, science, religion: their more or less identifiable ghosts arrive at us from different directions.

And so does that geometrised sculpture acquire another outline at the centre of a scenically constructed space that captures a temple's atmosphere. The clear quantum conditions of it become covered with auratic, totemic resonances, the latter heightened by an immersive sonority where coral chants and sounds are heard that one would associate with some shamanic ritual or tribal ceremony. What temple is this, we might ask—and what divine spirit is here sacralised. Some of the brief reports Barateiro invokes by appropriation on the list of events in the poster-leaflet might provide us with relevant interpretative clues: the historical beginning of neoliberalism; Milton Friedman's notion of free market; a brief section on the processes of lithium extraction; a concise explanation about the physical principles of the aforementioned quantum computer. We could now anticipate which spirit we are talking about. We think of the tenacious capitalism, that which spreads its protecting wing over all and sundry.

The reminiscent deployment of the sacralising device obviously operates as criticism, not as sublimation. As criticism of the precepts which fuel an aggressive neoliberal market; of the ideal of unceasing productive efficiency which supports it and renders its mode of operation materialistically obsessive; of its infinitely cumulative, supplementary, or supplanting voraciousness; of its increasing acceleration; of an unbridled technological evolution which easily breaks down equilibrating barriers as regards the sustainability of natural resources and human abilities. The artist endows the whole exhibition apparatus with a scathing stance that poses the question as to how, to a certain extent, technology and the market machine—its temporalities, spacialities, and products—have been deified and occupied a spectral but decisive place as regards the attribution of validity within the totality of experience. The abyss would there begin. And for us to feel such abyss with our bodies, the soundtrack takes on a sort of epic edge with—I would say—almost apocalyptic tonalities. The aforementioned sound pieces are joined by bits of riots, political demonstrations, cries of protest, or synthesised tunes that interrupt sounds from the natural world.

I cannot help but mention how Pedro Barateiro ironically includes himself—and, with this gesture, a certain facet of the art system—in the very regime he criticises by integrating his own image on the front of the poster provided (each visitor could take one copy). A selfie-like self-portrait, it provided the discourse with a satirical sense in regard to contemporary narcissism. Behind his face, we notice a fair puppet—a simultaneously fierce and risible demon. As though the image were not clear enough, the artist confirms it on the back: "I am a monster. I am not a businessman. I am an amateur, a magician, a clown, an entrepreneur of my own actions, just like you." The narrative excerpts Barateiro appropriates are juxtaposed with contrasting sentences of his, of a subjectivating, disturbing nature, between aphorism, confession, and revelation. We do not know, however, if the enunciator is the artist, still, or the monster already. It does not matter.

I have retained as well the sentence that completes the list:

"Write a sentence on my back. Carve an image on my face."

The implicit dimension of Pedro Barateiro's gesture is here much more sharply presented to us, as it seeks to highlight something subtler and more insidious. Something traced before the image has been carved; before even the sentence has been written. Not that spirit which materially describes neoliberal capitalism in itself (the written sentence, the already carved image), but rather that which precedes it, in a mobilising movement.

Returning to the fictitious temple, what it brings us is an idea of belief, of trust, with a view to the structure's teleological image (the quantum image, which is the image of hyper-technology, which is the image of scientific progress, which is the image of capitalism, is also the image of a belief). We already know the voracious aim of capitalism much resembles the promise of Christianity as regards the overcoming of the flesh. The dialectics of the body, however, is substantially different. There is no transcendence in capitalism: capitalism is us, and is realised and lived on Earth. And the reasoning that supports it, which is much profounder and older, is that of a belief in human dominance in the world; a delusional verticality conveyed by an idea of constant progress towards the supremacy of body over flesh, and over everything else. The inquisitive awareness of Pedro Barateiro minds that same mobilising ineluctability. Perhaps that is where the abyss has truly begun. Today, more than ever, we experience the vertigo of it.

David Revés (Lisboa, 1992). Researcher and independent curator. Master in Art Studies — Art Theory and Criticism from the Faculty of Fine Arts at the University of Porto (2018). He has been exploring the fields of new media and social media, taking particular interest in their crossings with art, museology, exhibition systems, and matters related to the figure of the spectator. He develops a critical practice of essays and articles which are regularly featured in some publications and art or academic projects.

Translation from portuguese by Diogo Montenegro.

Documentation of the work 'Abismo' (2019) from Pedro Barateiro on Vimeo.