To view an exhibition that spanned the recent confinement period is impossible without rethinking our own presence in the world, how we have worked with and will henceforth relate to artworks particularly, and cultural production in general. It is akin to a reunion with an old friend whom, notwithstanding some extra grey hairs, we recognise—and suddenly cherish the occasion all the more, confirming the maxim that the potentiality of loss arouses a sense and wish of belonging. As we walk through an exhibition that presents us and makes us look at a recent past, it is impossible, therefore, not to speak of such reunion in this text, and not to point out some concerns about the future.

Anuário is a project that analyses the city from different perspectives. The idea is truly remarkable: to carry out a survey over each year through what curators-in-charge Guilherme Blanc and João Ribas describe as "a shared curatorial process." Convening a diverse group of opinion makers, the purpose is to generate a panorama of art production in the city's publicly accessible spaces to be presented at the beginning of the year following its production. A win-win situation—for the city too!

This is the 2nd edition, and was prepared by Catarina Miranda, Eduarda Neves, Filipe Marques, Samuel Silva, and Simão Bolívar, whom I congratulate on this project's second curatorial stage, following the main curators' choices. And this is one of the most interesting aspects of Anuário: the curatorial crossings that unfold, not only within the group responsible for selecting what is to be displayed, but also in the curatorial processes that generated the exhibitions throughout 2019—reference to the latter being made on the captions that identify the works on display. The result is a palimpsest of aesthetic positionings and choices that are surely worth paying attention to.

I have once sought to reformulate the notion of déja vue in such a manner that it could perhaps explain how images, after being released into the world, often return in an orphaned condition. I have called it vue de nouveau (intentionally in French), postulating an idea of commitment to the future as opposed to the idea of dejá vue, in which the past perishes once again. I propose that, in vue de nouveau, memory contains a formulation that projects itself into a future in potency, i.e. it generates an archive in which meanings are remade (that is, it does not merely generate a spectre in which something exhausted comes to light, as is the case of the feeling of dejá vue).

I saw the exhibition before the confinement. I returned when it reopened. The feeling of seeing it once again with a new sense—that is, the commitment to the future I here speak of—arose both times.

We see some of the works we had previously seen alongside others we had never seen: we see a past in potency that shapes a dynamic archive for the future to come. All Art, every exhibition, is a recontextualisation—in this case, as stated by the curators, "in a non-linear format," like "a nomad archive with no beginning or end."

I must touch upon the venue that hosts Anuário this year, Palácio das Artes, on Largo de São Domingos. An imponent palace, its layout features a linearity of rooms that thwarts the non-linear direction that seems to have been important to the curators. A less happy choice of a venue into which the exhibition does not fit, with works encroached on each other in somewhat crammed rooms—almost all of them. A strong contrast with Anuário 18, which benefitted from the Municipal Gallery's spatial resources by putting together a bold, creative display.

An exception is perhaps made to the staircase that served as hall and impromptu stage for the opening performances by Guilherme de Sousa & Pedro Azevedo, a young duo that cover various artistic disciplines and respatialised a part of Vernissage, previously presented at Mala Voadora; and for a restaging of the show Pérola is Burning, evincing at Anúario the presence of a parallel context to the institutional exhibition one, as an extension to alternative places of identity and artistic affirmation. Other performances by António Poppe and Flávio Rodrigues, among others, were previously scheduled to March and April, and have been postponed to another time or are awaiting adaptation to a different format. I vehemently praise the presence of performance, all the more so in the various expressions that were presented at Anuário, and I raise one of the concerns I have pointed out earlier in this text: what are we to do with the space separating us from a performer? How can we stop listening to their breathing as closely as possible? The expression "live" suddenly assails us, with an urgency of hope we do not want to (cannot) postpone.

Also in the entrance hall, we find Jonathan Uliel Saldanha's videos. The projected one, in the sunlight, poses difficulties for viewing—a sort of contradiction over contemporary visibility (an eye is glimpsed that cannot be seen)—while the monitor shows a hallucinating journey that makes us question our bearings. We also find Paulo Ansiães Monteiro's (PAM) Palavódromo, and Susana Chiocca's Totem e a destruição iminente #2, which, just like Mauro Ventura or Mauro Cerqueira ahead, wink at the materiality of a sort of arte povera contaminated with other discourses, decontextualisations, and assemblages. At the entrance, still, the sound is deployed by Pedro Tudela, the thickness of it becoming a sculpture, in keeping with the production he has gotten us used to. In the first room, Nuno Ramalho presents a fortunately isolated work of a bewildering dematerialisation and mordant sense of humour.

As we walk through the rooms, we identify artists in different career moments, with recent, transitional, or stabilised paths. Examples of the latter are Francisco Tropa or João Baeta: the former integrating, with Vera Mota, a group that represents a sculptural dimension; the latter beside other artists that debate the body in different media, from video to the use of biological matter itself, like Daniel Moreira & Rita Castro Neves and Carla Castiajo.

The material part of Guilherme de Sousa & Pedro Azevedo's Vernissage interrupts our route. Their homage to Richard Serra (it is unavoidable: the iron filing!), and to others who in the late 60s opened the sculptural field out onto an expanded spatiality, gets severed, I would say, as the performance is separated from it, as I had the chance to watch at the Mala Voadora presentation, but its experiential dimension cunningly remains. The next room places us between the blackness of Fabrízio Matos and Dan Halter’s collective effort for visibility: a poetic form of the impossibility of gaze in the former; in the latter, a political form of making visible as we listen over and over again to the dance hit "Everybody's Free," as an assertive scream for hope and freedom. But there are also optical experiences—Tomás Abreu and Carlos Mensil, who play with the deception of our senses. The most frustrating room, due to an absolute lack of space, exhibits the works of Emílio Agra, a set of minimal gestures that reorganise daily life; of Patrícia Geraldes, the tactile seriality of whose work would be worthy of more space; and two works of Carlos Arteiro, the result of a material exploration in a previous residency, the positioning of which does not allow for a proper viewing.

A surprising installation of a forensic guise by the collective Comité Expedicionário de Desorientação that reflects upon the city's fates fraternises with Celeste Cerqueira's installed drawings and with Tiago Afonso's video Punk's not Dread, which, due to the portrayed experiences and the venue it was initially presented in, the Cedofeita Shopping Centre, brings in a non-institutional dynamic. The duo ACCA—André Covas and Carmo Azevedo install, in the coffer, the room originally presented at Open Studio Campanice, thus bringing another non-institutional space into Anuário. This work is amusing, and reflects on the manipulation we let ourselves be subjected to, but it also exposes the illusions and limitations of the so-called interactive art. In the last room, joining Ângelo Ferreira de Sousa's denunciation of the obscurity of the media, João Pedro Trindade's reuse of common materials and Marco Pires' Warburguian gesture, as if they were different referential catalogues of the same world. And then, as though representing painting, João Gabriel Pereira with a very well-chosen work; and drawing, Mariana Barrote, whose pieces allude to the disembodiment of the gesture of drawing.

I leave here one last concern: with the prospect of several months without exhibition activity, how will Anuário'20 be?

How are we to represent the experience of the suspension, the exhibitions which, in Porto as in the whole world, were closed with no visitors? What would have happened in those people-less venues—as though the works could have started Toy Story-like secret conversations, perhaps reconfiguring their meanings with humour and detachment, guarded from the gaze and judgement of humans?!

But I will not end this text with a light fable; my true concern relates to what is usually called "development of audience loyalty." How will people return to the exhibition spaces, particularly those who experience a lower ease of access and whom the city was so actively looking, and very consistently managing, to capture? To celebrate once again the opening of an exhibition with the attendance and enthusiasm of Anuário'19 must not remain an unattainable desire. Audience numbers can no longer be an indicator of success (certainly for tender procedures), since they need to be restrained. The collective experience of art, so crucial to generate a sense of sharing and to push forward what we do, must be reformulated, and it will not happen online nor will it be deferred: it must take place in a consistent social space we cannot ever let go, and all this far beyond the physical space we occupy. May the space emanating from this text contribute towards it as well. See you at Anuário'20!

Holds a Degree in Sculpture from the Faculty of Fine Arts, University of Porto, the European Scenography Master of Arts from Central St Martin’s College and Utrecht School of the Arts; Master of Arts Theory and Practice of Public Art & Design at Chelsea College of Art & Design, and a PhD by project at Chelsea College”. Key Visiting Lecturer at Central St. Martins College of Art & Design, London, between 1998 and 2006. Has been exhibiting in different contexts and awarded scholarships from the Calouste Gulbenkian Foundation, Ministry of Culture, Contemporary Art Society and The London Institute, and received, as an artist, support from the Direcção Geral das Artes / Instituto das Artes. Her editorial work has also been continuous with several published books. Responsible for the Art and Architecture Programme for Guimarães 2012 European Capital of Culture, she has been producing curatorial work with several institutional colections and in diverse exhibition contexts. Lectures since 2004, at the Fine Arts Faculty, University of Porto, where she is Director of the Master of Art and Design for the Public Space where she is Integrated Member of i2ads, Research Institute in Art, Design and Society. 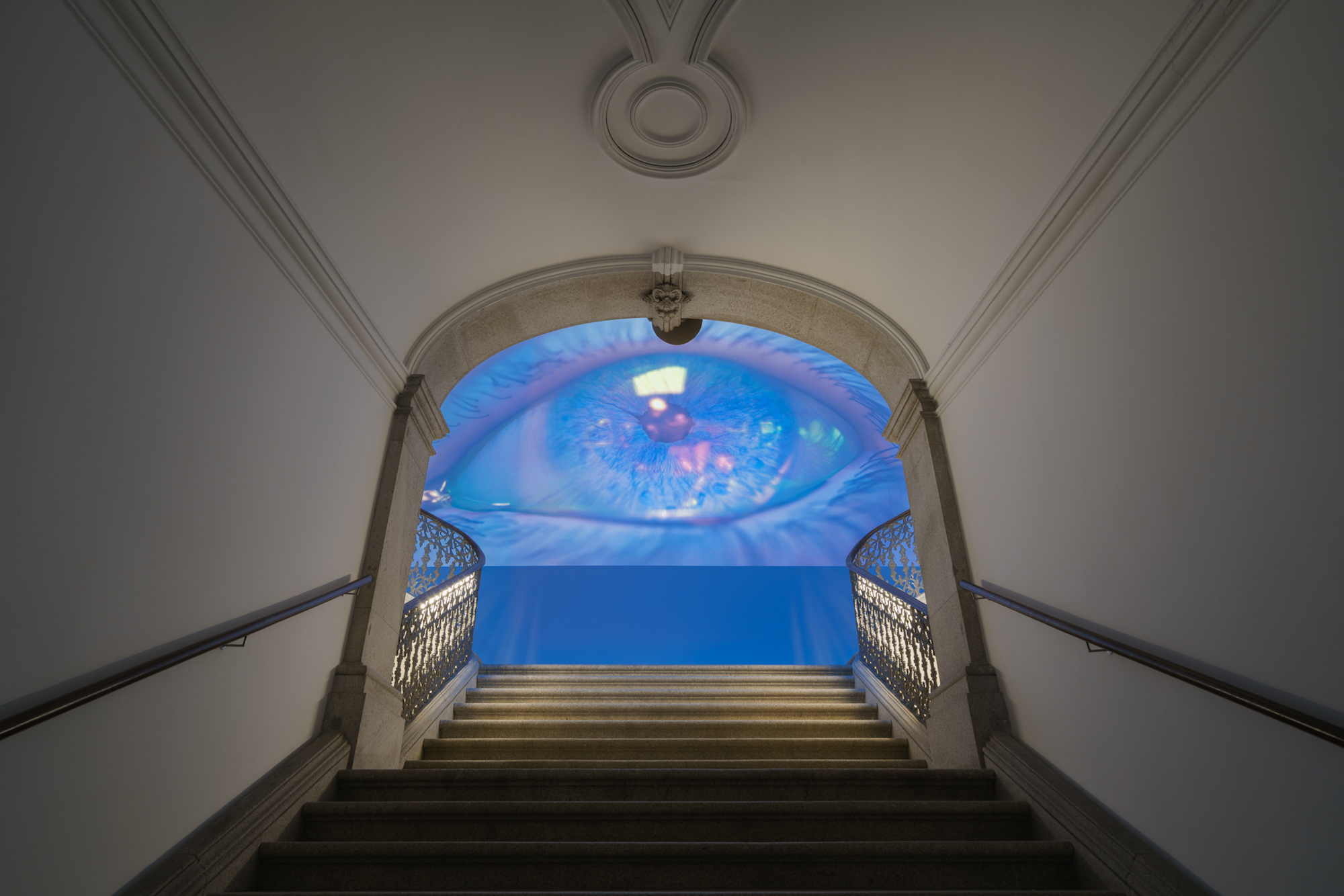