Essay — by Eduarda Neves
Not Cancelled! The Work of Art in the Age of Viral Propagation 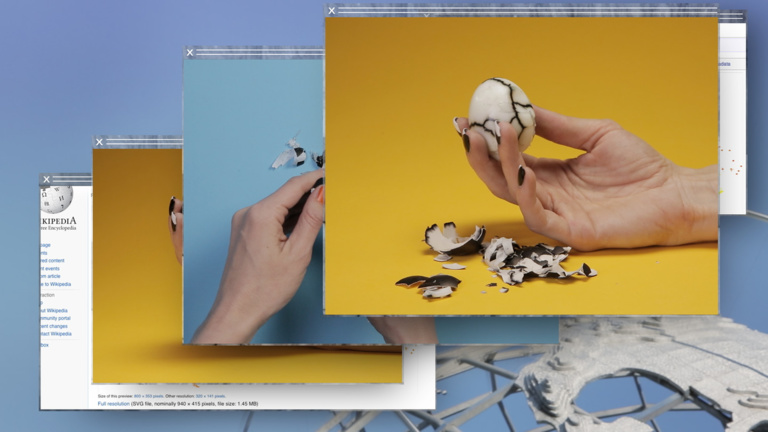 A coronavirus claims its place in the world. In the world of contemporary art, too. To SARS-CoV-2, which has brought forth Covid-19, we owe a certain program of metaphysical unveiling. Affected by our condition of hidden hosts, we are unaware of the processes through which the parasite transforms us into its equal. A game where exchanges are potentially undetermined. Arriving as a parasite, it infiltrates in the constitutive fabric of each of us.
Review — by José Marmeleira
Joana Escoval: Mutações. The Last Poet 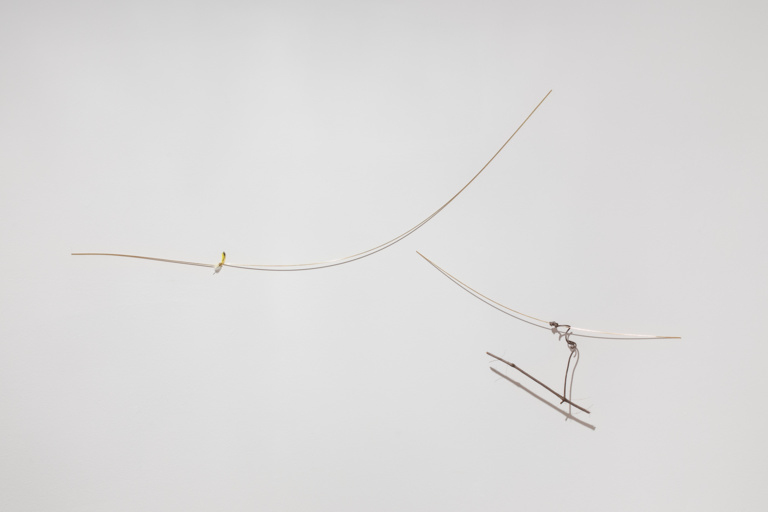 One of the faculties and capacities poetry and philosophy shared in Ancient times was the recognition of what appeared, of what existed. Not only humans, but also organic and inorganic things, the natural world, celestial bodies, the cosmos. A strictly utilitarian view of other sentient beings, elements, and natural phenomena was yet to dominate the world. Things did not exist in keeping with the happiness of Man, and humans did not exist as the ultimate, absolute end of all things.
Review — by Cristina Sanchez-Kozyreva
Zheng Bo: The Soft and Weak Are Companions of Life 柔弱者生之徒 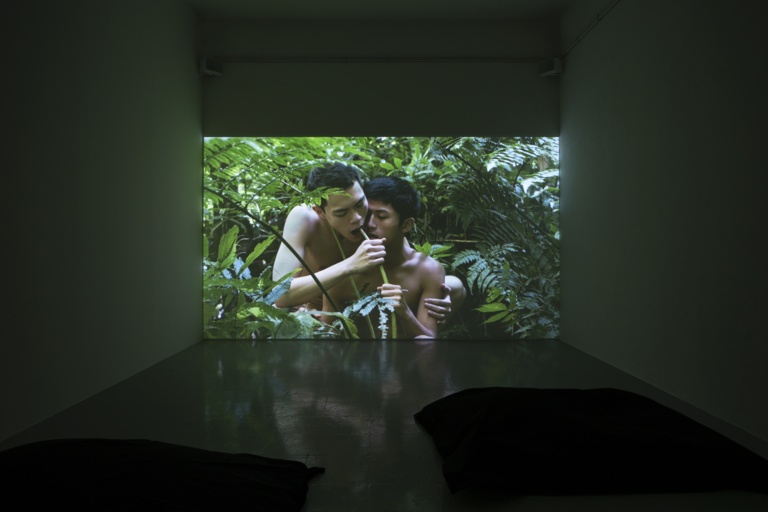 If you haven’t thought about your sexual relationship with plants, Bo Zheng’s first solo exhibition at Kunsthalle Lissabon (until the end of August) provides the perfect opportunity to consider it. On display, a series of four videos titled Pteridophilia, numbered from 1 to 4; and an ensemble of pencil-on-paper drawings titled Drawing Life. The presentation of the two series is divided into two rooms in Kunsthalle’s basement space.
Review — by José Marmeleira
Mariana Caló & Francisco Queimadela: Corpo radial 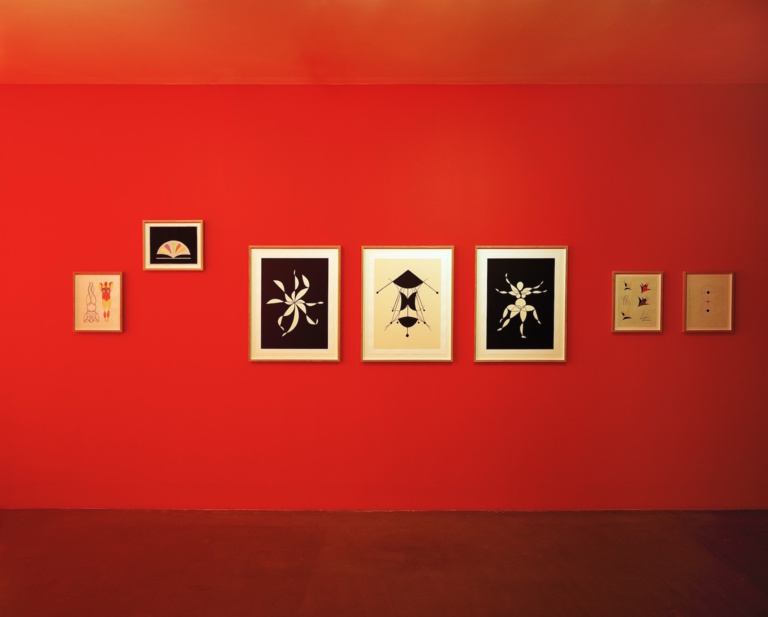 Before we enter Mariana Caló & Francisco Queimadela's exhibition Radial body, curated by Susana Ventura at Galeria Boavista, a certain fact indicates the mental, visual, and spiritual universe of the duo. Red filters have been applied on the windows of the gallery, the inside of the latter thus delicately illuminated. A chromatic, orangish-red atmosphere awaits us in a room within which another is found: one where memory is activated in body and mind by images and places, by drawings, and by the architecture. Not by any texts, not by any writing.
Review — by José Marmeleira
Homo Kosmos (cough cough) 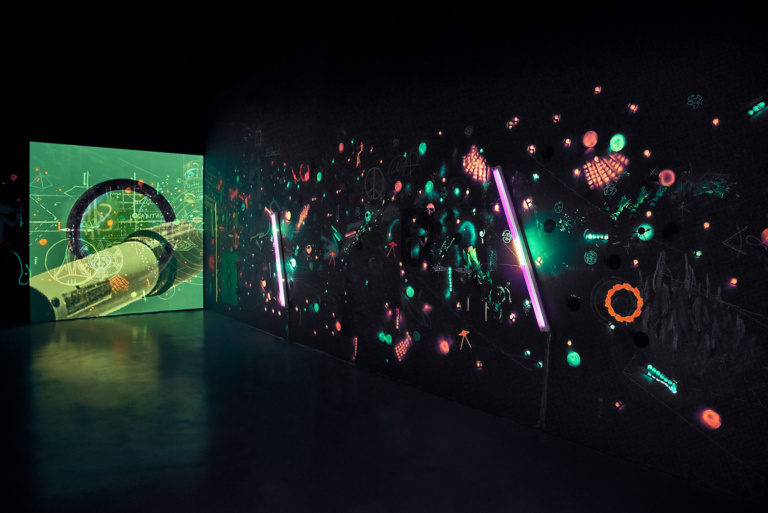 Such is what the visitor might experience as they enter Tiago Borges and Yonamine's Homo Kosmos (cough cough), at Galeria Avenida da Índia. Images from different places are projected onto the viewer's body, while the sound of an acoustic instrument flows throughout the space, asserting the distress of a trance which only seldom subsides. The works on display describe a non-geometric, fragmented, scattered path composed of small open spaces where shadows, imagens, drawings, objects sprout.
Review — by Isabel Nogueira
Marcelo Cidade: Equivalência e desequilíbrio 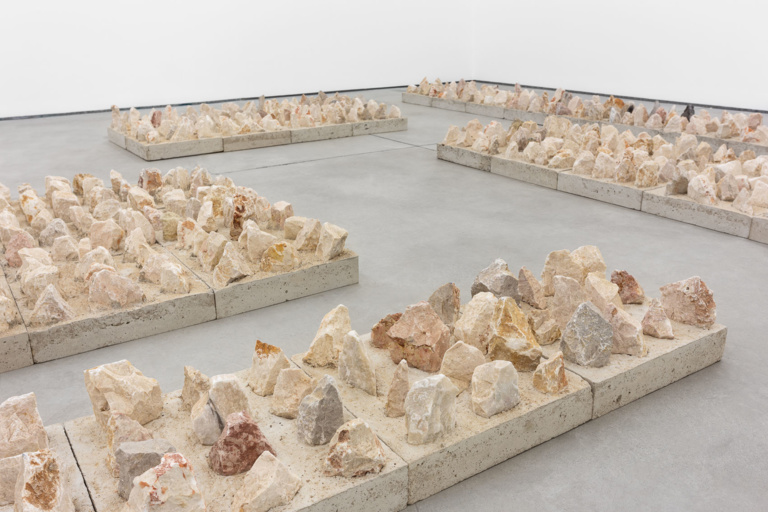 Marcelo Cidade (b. 1979, São Paulo) presents a remarkable installation at Galeria Bruno Múrias. Titled Equivalence and imbalance, it summons up fundamental questions, drawing on references both of an aesthetic and artistic character—Carl Andre's well-known Minimal sculpture series—and of an experiential, social, and political nature—the utterly imbalanced conditions that organise the world, under the spotlight of aggressive capitalism.
Interview — by José Marmeleira
Alicia Kopf: Speculative Intimacy 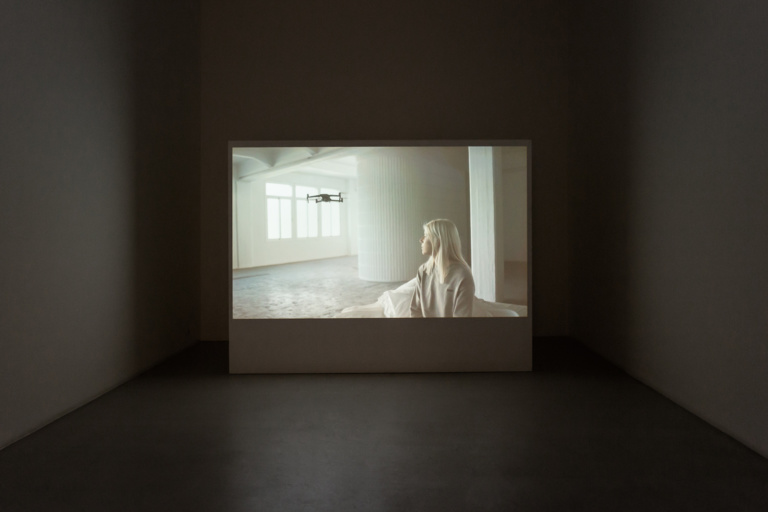 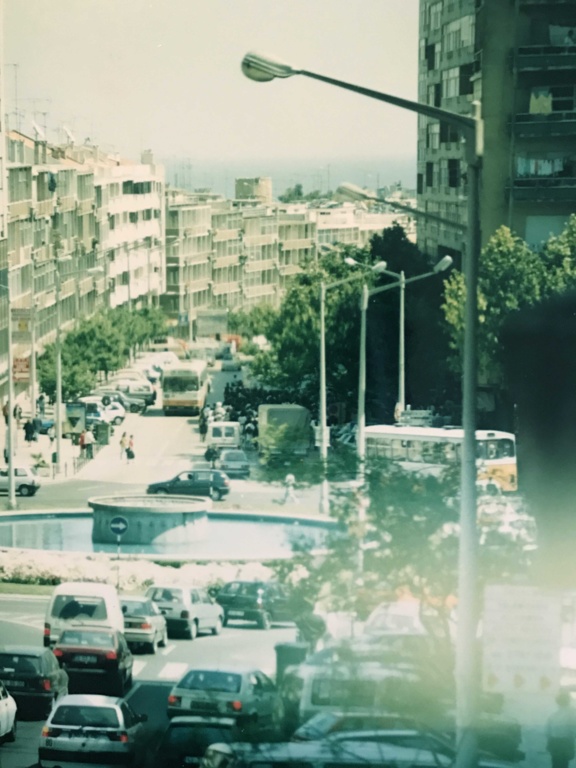 How do we change the way we relate to each other and to all this? In 1961, Michel Foucault published Madness and Civilization. Almost a dozen years later, he would add an appendix to the 1972 edition in direct reply to the criticism of philosopher Jacques Derrida: This body, this paper, this fire. Between these two Madness and Civilization editions, May '68 took place—the catalyst of a social revolution in France instigated by student protests that would have global repercussions.
Review — by José Marmeleira
Through Windows 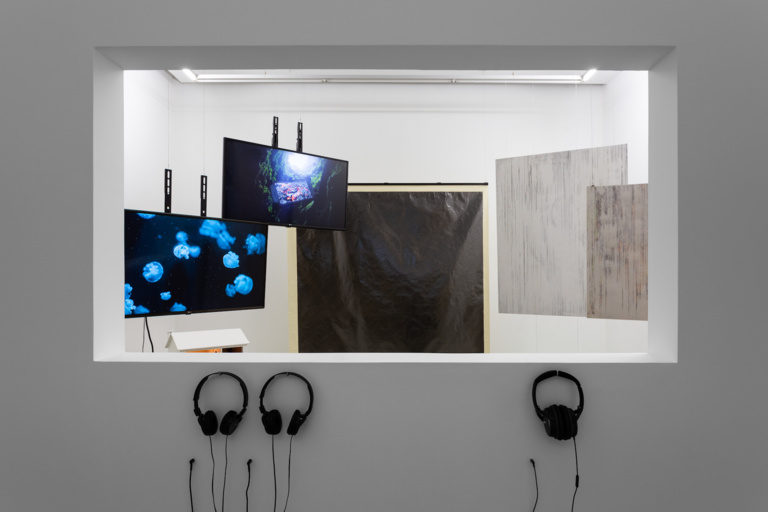 Those who visit the exhibition Through Windows, at gallery Uma Lulik until September 19, will notice an architectonic element, leaning towards a certain lack of definition, taking shape between their own body and the artworks. It is both a panorama and a counter. A framework and a passage. An obstacle and a point of view. Curated by Miguel Mesquita, the group show Through Windows explores such unfolding of the senses originating from a defined concept and element: the window, as a screen, an opening, an entrance.
Essay — by Gisela Casimiro
Gisela Casimiro: Second Brain I/III 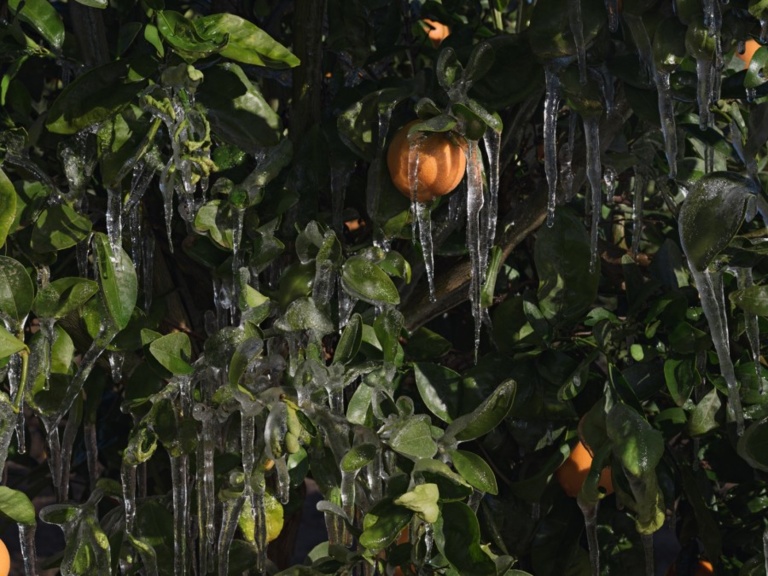 “What is your great hunger? To understand your great hunger, you must understand what breaks your heart.” Thus Tererai Trend teaches us to be vulnerable. What breaks my heart? This question, in fact, is about what breaks our heart as Humanity and what we can do to mend it, to mend ourselves. We're in March, and the pandemic that has slowed the world down is here. We are not yet fully aware of the trauma that has been devastating especially Chinese and Italian citizens for months.
Interview — by Antonia Gaeta
Earthkeeping . Earthshaking — arte, feminismos e ecologia 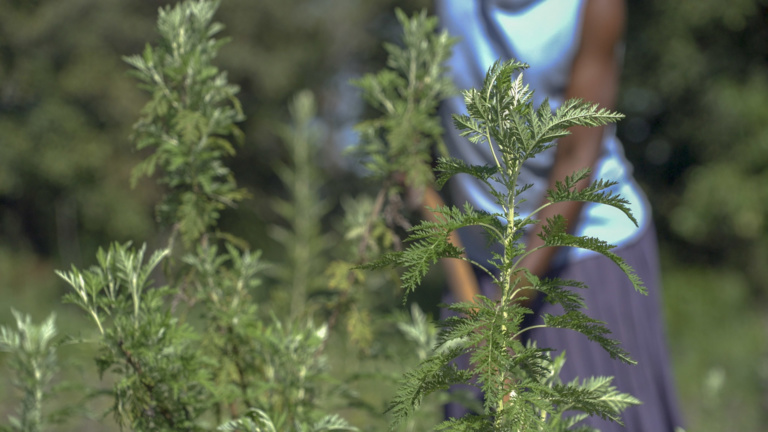 The title comes from a rather well-known feminist magazine titled Heresies: A Feminist Publication on Art and Politics, which was first published in 1977 in the US, in New York. In a way, the exhibition was strongly inspired in said magazine, not only in regard to the 13th issue, which in 1981 explored the relationships between feminisms and ecology, but also from the methodological point of view, as we took an interest in the magazine as a format that allows for gathering multiple perspectives. It is exactly that line of connection between different voices and approaches, that heterogeneity, which we aimed to preserve in the exhibition.
Essay — by Bárbara Silva
MATTIN: Expanding Concert (Lisboa 2019-2023) 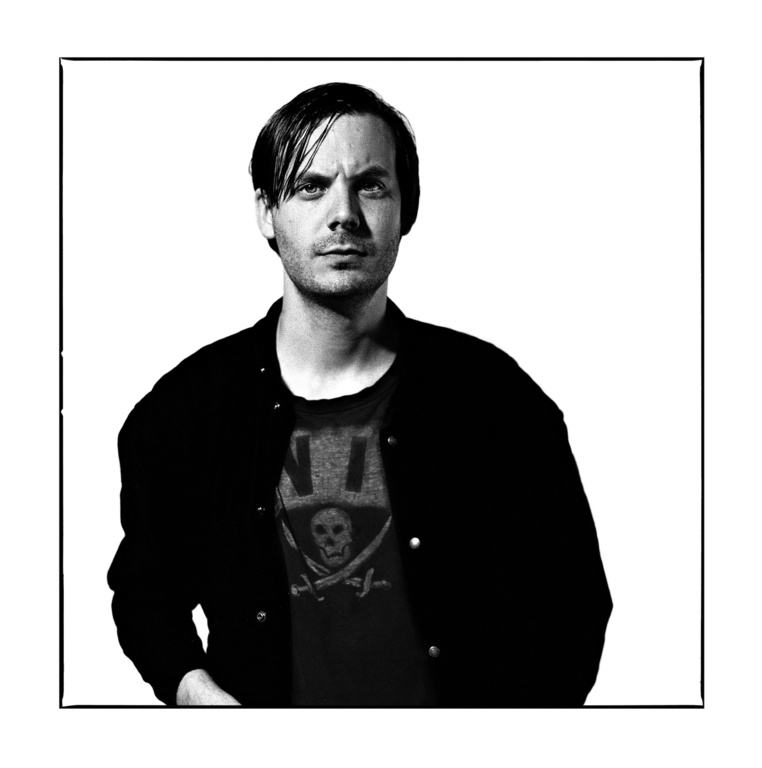 About the first performance of Mattin's Expanding Concert (2019–2023), on 6th December 2019, 7 p.m., at Galeria da Boavista. "Alguna pregunta?" [Any questions?] Thus began the first of five Expanding Concert (2019–2023) performances by Mattin, the Bilbao-born artist currently living in Berlin. His is a versatile work, mediated by noise and improvisation. Noise and improvisation are the main ingredients of his works, which often tackle topics related to phenomena such as gentrification and individual or collective alienation in a subjective, intangible manner.
Review — by Isabel Nogueira
Susana Mendes Silva: Como Silenciar uma Poeta 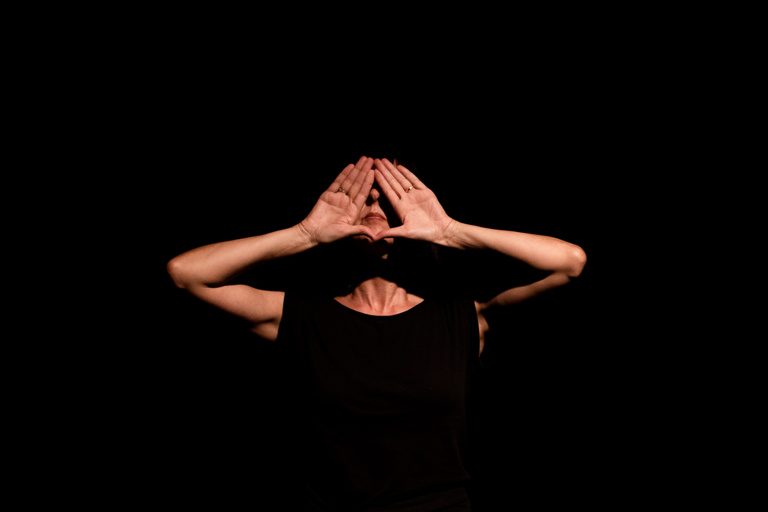 In the context of Things Founded in Silence, a National Museum of Contemporary Art — Chiado Museum programme, curated by Marta Rema, this installation by Susana Mendes Silva (b. 1972) invites us not only to discover but also, above all, to enter its universe and even empathise with it and with the main figure it focuses on: poet and writer Judith Teixeira (1880–1959), also known by the pen name Lena de Valois.
↖︎Back to Top