It’s a date is a column of Contemporânea written by Alberta Romano dedicated to studio visits with artists from Lisbon and from all over the word, both in person and online.

It has been a while since I made a studio visit with the aim of writing about it for a magazine. During these last few months that separated me from new studio visits, I often thought that there are some mechanisms and structures that can only work in some specific moments. "It's a date" is one of those many formats born during the pandemic, a moment in which, understandably, we all felt a huge desire to have “dates", deadlines, and the desire to share every kind of exchange we had with others.

Nowadays it is different: appointments have started again to follow one another, people meet more often, while contrasting information continues to be broadcasted all over the media. It's hardly surprising that someone can still be a bit confused.

You know, for example, when our sight gets blurry while looking at an undefined point in the room and suddenly our entire surrounding seems all muffled? Lately, the many things to do make me feel exactly like that, but not for only a few minutes, sometimes for an entire day, as if I had lost the habit of perceiving all that noise and my body requires more time to rest in a rarefied, muffled, suspended atmosphere.

“I never really understood the difference between real or imaginary. Your kind [humans] spends a lot of their time alive in sleep. It helps you process information.In this state you live through imaginary images you call dreams. When you’re awake, you spend a great deal of your time processing images and sounds. Information that is transmitted to you.Images that shape your reality. But all these things are illusions in a way.”[1]

In order to meet Pedro Moreira, I went to Porto, after having just returned to Lisbon after spending one week in Palermo. I now consider all those days as a single long journey.

As soon as I arrived in Porto, I went to visit the Serralves Museum. I happily got lost inside the group exhibition Modus Operandi, which brings together a selection of works that are part of their collection since 1989. When I found myself in the room of “Arte povera,” I thought about going through it quickly, with the idea of skipping that room completely, but, as often happens with arte povera, its surprising delicacy managed to capture my listless attention. Entrare nell’opera [Entering the work], 1971, by Giovanni Anselmo, prevailed over the room. It’s both a picture of a landscape and a self-portrait printed on a huge canvas. Legend has it that Anselmo positioned the camera on a hill, adjusted the focus on a precise point, and then ran towards that point until he reached it. Entrare nell’opera is not only an image in which the artist declares the vastness of nature in relation to human being, but also a frenzied descent towards the infinity of an endless space; and, above all, it is a helpless plunge into the omnipotence of nature.

“But we [the Tripplesapiens] still operate with similar emotions to those of your species. Our immortality allows us to live and enjoy our surroundings, to be grounded, to be present. We appreciate our surroundings because they don’t threaten us.
Most of these things that shape our existence … are all things that your kind [humans] has access to too. Even if you often take it for granted.”[2]

Wandering around a new city reminded me of how nice this sensation of getting lost can be. I’ve always known this, but lately I had forgotten about it. The forced isolation became comfortable at some point, and while I was travelling alone, I proudly discovered that one of my favourite shelters seems to have the shape of an aimless independence.

“All those who are led here are products of cause and effect. Many think they have full control over the choices they make, but the path of an individual, even the ones with the ability to self-identify, never strays too far from pre-determined movements.”[3]

That morning, while I was going to Pedro’s studio, I finally finished a small book that for a month I had been always carrying with me. It was From the Earth to the Moon, written by Jules Verne.

I've never been a big fan of sci-fi novels, especially when it comes to space, galaxies and astronomical calculations. However, I found this book in my grandfather's library—it’s an old edition from 1963 which was probably bought for my father. Reading that story, in which the three protagonists are ready to isolate themselves from the rest of the world and perhaps even to die for their love towards their studies, was very inspiring. But, at the same time, it often asked me questions while reading it: Was my father excited at the idea of such a galactic trip when he was young? What did he think when Apollo 11 finally landed on the moon? Above all, has he ever dreamed of going there and if so what did he hope to find?

“Survival has been written into the DNA of all living beings; it’s like a code, or software.
The sea and the earth provide us with what we need to stay alive within this vast multiverse. But have you ever wondered about eternal life? It seems to be a great human endeavour […].”[4]

When I finally met Pedro at the studio, I didn’t know that every artwork Pedro makes is done from the perspective of one of the characters of the video The Tripplesapiens: Pilot, 2018 (from which all the previous quotes are taken). This video is the first episode of the Tripplesapiens project, which Pedro conceived during a residency[5] in which they self-isolated themselves with videogames while in the countryside. The world inhabited by the Tripplesapiens is a utopian one, where beings transcend gender, race, and nationality. Tripplesapiens are immortal, and time is spent improving individual skill while learning more about new and past worlds. Tlön (one of the Tripplesapiens), who guides the viewer in almost all the artist’s works, always refers to Pedro as “the human.”

Pedro: “It was 2017, when basically I isolated myself in a residency space, which was in the middle of the countryside. I had no contact with anyone for an entire month. My mum was bringing me food, leaving it outside the door. During that time, I could only wake up, play the game, eat, play the game, and go to sleep. But I could also walk around the neighbourhood, and that’s when I happened to feel a bit confused by sounds and landscapes. I was thinking that maybe everything was just programmed to be that way.”

Alberta: “How were your dreams during that time?”

Pedro: “I felt like my dreams were more real than my reality.”

After that, Pedro showed me some sculptures: toothed beings, "naked" but also scary. Some reminded me of tubers, which did not diminish their aggressiveness at all; on the contrary, it made them even more dangerous, as, in my mind, they could also lie down under the ground.

But it wasn't long before Pedro showed me another game, this time a table game, not a video one. A Primeira Pedra, 2021 is a tabletop game in which players can work together or against each other to resolve a series of situational problems and earn points doing so. What struck me the most were the pawns, the real stars of this game—hieratic and imperturbable beings made of clay from whose bodies sprout small hooks to which it is possible to hang the stones won during the game.

One of the pawns, the Sporekin, reminds me of Il Guerriero di Capestrano [The Warrior of Capestrano], which is a tall limestone statue of a Picene warrior, dated to around the 6th century BC, today hosted by the National Archaeological Museum of Abruzzo, the region in Italy where I was born and raised. The Warrior wears a hat with a huge brim, a disk-type armour protecting chest and back, a wide belt, some necklaces, and armlets. Although studies now identify the warrior as a man, the charm of this sculpture has always been in its ambiguity. Its curves, its ornaments have always made the Warrior of Capestrano a mysterious character whom one was free to daydream about, especially at a time, when I was young in the 90s, when fashion seemed to impose rigidly binary guidelines.

It is really true what Pedro says and affirms through their games: “By playing, one can learn new things, develop new skills and reflect a lot on oneself.”

However, we often hear sentences such as: "Why are you wasting your time with video games?” “Couldn't you do something more productive?"

I think that the best way to answer these questions, but also to end this text, may be a revisited sentence by Pedro, more precisely by their virtual persona Ped.Moreira, who once read something similar and then reinterpreted in this way:

“Experiencing can be generative, you don’t need to be the author of everything.”

Pedro Moreira is a queer multiracial artist whose work is contextualized within the language of creationism and its parallels with virtually terraformed landscapes such as videogames and social media, exploring the relationship between the idealization of virtual spaces and theological or mythological/utopian phenomenology. Using the method of world-building as a narrative tool, Moreira’s research materialises through their multidisciplinary practice in the form of videos, installations, performances, and sculptures, usually retaining some level of interactivity.

Being an alumni comrade of the collective PACTO Research, Moreira has engaged in a variety of PACTO organized events such as: PACTO’s Pool Party at Public Pool Gallery (Los Angeles, 2019), This Will Take Time (Los Angeles, 2019) Collectives as Catalysts at Raven Row (London, 2019), PACTO, at 18 Malden Road (London, 2018), COMPACTO at Aarhus Center for Visual Art (Aarhus, 2018), and It’s Their Thought That Counts at Croydon Art Store (London, 2018).

Alberta Romano is an art historian and contemporary art curator born in Pescara, Italy in 1991. She is currently the curator of Kunsthalle Lissabon. Since 2017 she has worked with the CRC Foundation in Cuneo, coordinating the acquisitions for their contemporary art collection. After graduating with a BA in Art History at La Sapienza in Rome and with an MFA in Visual Cultures and Curatorial Practices at the Academy of Fine Arts in Brera in Milan, she attended the curatorial program CAMPO16 at Fondazione Sandretto Re Rebaudengo in Turin. She has written for Artforum, Flash Art, Contemporânea and Kabul Magazine, among other magazines. 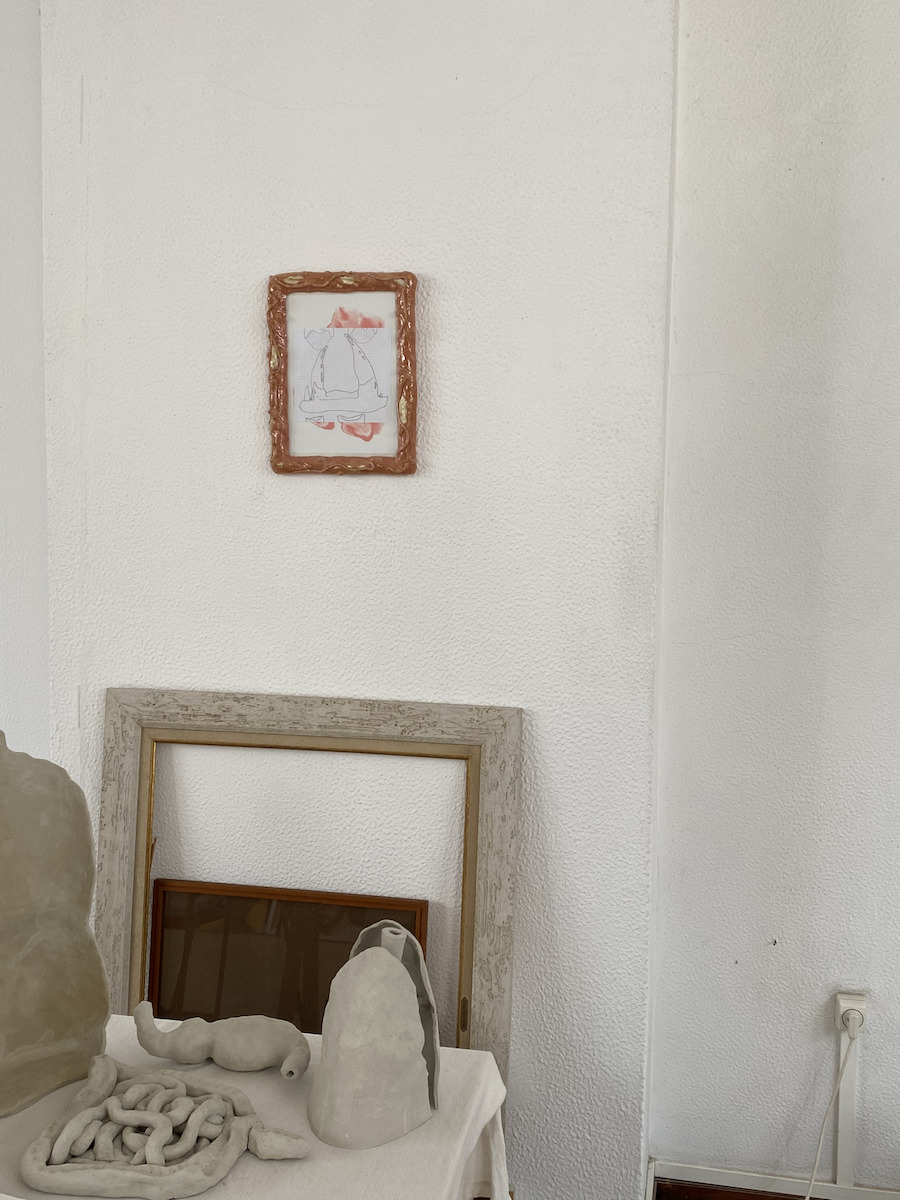