Cut Down The Middle gathers works that softly sift through the humdrum of the urban fabric and bring forth seemingly minor human gestures, emotions and thoughts through a variety of media, with more than 20 works including video, installation, print, sculpture, watercolour, sound, performance, and ink on wood. Departing from recent works made by João Vasco Paiva, the exhibition embodies conversations between these and the works of artists with whom Vasco Paiva has been dialoguing for the last ten years, such as Heman Chong, Ramiro Guerreiro, Ko Sin Tung, and Magdalen Wong. These practices span various geographies (mainly Portugal and Hong Kong), albeit not documenting them, but rather retaining elements of their urban essence, revealing the inconspicuous but permanent qualities of physical and conceptual dwellings, flirting between collective and individual perceptions.

As a point of departure for the elaboration of the show, Emergency Crash Gate, Typical Details of Concrete Profile Barrier to Accommodate Column of Light Pole and Concrete Profile Barrier - Terminal Section, Elevation + Plan (both works 2021) are large stylised watercolours of urban barriers. Stripped down from their context and refined to geometrical colourful designs, the drawings become symbols, sort of hieroglyphs from a peculiar highway code. Nearby, hanging on the wall is Untitled_ Sunday IV (2017), a rendering of a flattened cardboard box in acrylic coated stone resin. Cardboard is a material that is pervasive in any city. In Hong Kong specifically, live-in domestic workers (mostly Filipinos and Indonesians) use it on their day off to sit and gather in public spaces. Anyone visiting Hong Kong on a Sunday is bemused and fascinated by these thousands of joyful women taking over stairs, walkway bridges, and other corners of the city, playing cards, listening to music, dancing with their friends from home, cousins and sisters, on a sea of carton boxes-made-virtual living rooms, all next to each other, covering the hardness of the cemented city fabric.

This stretch between fluidity and rigidity of the urban architecture is echoed in Ramiro Guerreiro’s Grelhagem sobre abertura pré-existente II (2021), a large wall-like double curtain made of canvas with a printed-bricks motif that you have to push open to enter the exhibition space. Next to it on a shelf, a selection of postcards with similar facades, photographed in Lisbon (the particular streets are indicated on the backs of the postcards), are here for visitors to keep as souvenir. More printed material as memorabilia comes in the shape of posters, made available as free downloads on the exhibition website, conceptualised by Singapore-based artist Heman Chong in MAKE YOUR OWN PUBLIC LIBRARY! (2020)—also rendered as a larger wallpaper made of these multiples on one wall of the gallery. These posters are reminiscent of those promoting musical events found in city streets (less so in Singapore than in Lisbon), on lamp posts, construction walls, and other temporary or unattended walls. The injunction made by the artist is something he practices himself—he has been collecting books previously unread by their donators into an itinerant library (not on show, called The Library of Unread Books, 2016–ongoing).

The exhibition doesn’t allude to those humans who own the city, but rather to those who exist in it, often for work, and are adapting, shapeless like water, to its angles and crevasses: the lower-middle class, the workers, the youth. Bearing witness to our possible bodily engagement with urban furniture and architecture, Guerreiro’s pessoa-pano-do-pó, av. Marconi (2009) is a looped video where the artist, dressed in a bright orange boiler suit, dusts with his body a sculpted overdoor atop a scaffolding. In a similar way, Vasco Paiva’s series Paisagem/Objeto LB/MRC, ICL, IR, and TM (all 2016) is part of a larger skatepark modular construction covered with satellite imagery of places the artist visited, that he consequently invited skaters to use, retaining marks of their passage as records. 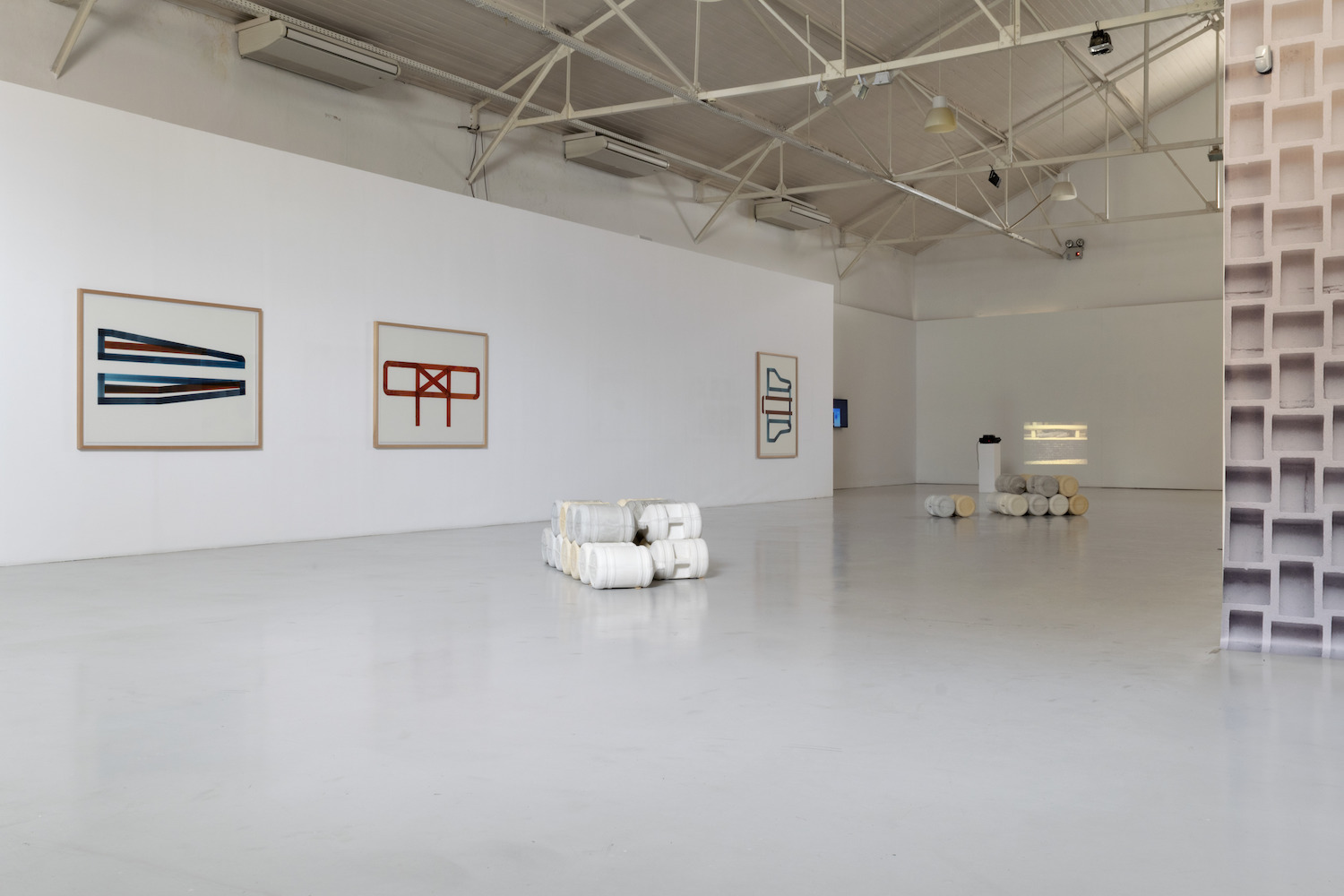 Like brushstrokes on a conceptual three-dimensional canvas, the multiplication of works in the show are on par with the circulation and the interaction of humans within their built surroundings, how they adjust to what is often referred as the urban jungle—and the nearly invisible traces they live behind. What is left are gestures and scratches, a shifting of thoughts to find some freedom in unexpected spaces, and the construction of make-dos that aren’t officially part of urban planning but that, nevertheless, grow like weed. Ko Sin Tung’s Sunflower and safety helmet (2017) is a blown out photographic detail of an advert found outside of a Hong Kong construction site. By zooming in on the yellows of two sunflowers and the side of a helmet, it seems to message resistance in response to the gross and manipulative promotional efforts selling us the idea that housing developments are one with nature. Also via the use of close-ups on the unremarkable, the artist authored an endearing double-channel video, The world of yesterday (2017), which, like a visual puzzle, focuses in and out on cut-outs of images of the city—the artist’s obstructed window views, her cat, and others—coloured in emotional blues, reds, or darkened, with his subtitled comments as a pensive internal voice.

Water and cement—two key and common materials in human settlements—are represented together in Untitled (Containers)_barricade remake I and II (2021), two large stacks of water coolers casted in cement and obstructing the gallery floor. Their appearance document the manufactured ubiquity of the original objects in densely populated areas, where consumption of bottled water is high (not to mention that, worryingly, Hong Kong has one of the most elevated consumption of tap and waste water in the world), and the manufactured versatility of the cement as a material largely used to erect urban centres everywhere.

Easily missable—which seems the point—several of Hong Kong-born artist Magdalen Wong’s Untitled water (2020) are lookalike water puddles made of resin that reside on different spots of the gallery floor, and play with our cognitive understanding of the intentionally staged and the accidental occurrence. Once discovered, these realistic splashes challenge the visitors’ footing—what if they are slippery? Or, in the codified context of an exhibition, what if we damage them? Wong’s inconspicuous traps, like little stones in your shoe, handicap our footing in a subtle but persistent way. Also by Wong, Dying robots’ last words (2017–ongoing) is a sound work sporadically broadcasting the readings, by various people, of the last words of robots from popular movies. Irregular, at times inaudible and ghostly, it inhabits the exhibition space with its part machine, part human phantom presence.

Ultimately, Cut Down The Middle is a crowded but quiet show that asks you to go within, not so much in a spiritual way, but rather as a way towards a little more individual independence in order to find space within a fabricated and mechanised environment. Urban settings may be borderline suffocating, or overwhelming, or steering your thoughts in a direction that isn’t your own; yet, these artists, albeit timidly through minute actions, open small gaps in what could potentially contribute to more personal autonomy but also, through empathy, to the strengthening of social bonds.

Cristina Sanchez-Kozyreva is an art critic, curator and writer. She is a regular international contributor to art publications such as Artforum, Frieze, Hyperallergic, and other publications including the South China Morning Post. She was the co-founder and editor-in-chief of Hong Kong-based independent art magazine Pipeline that ran print editions form 2011 to 2016 where she curated thematic issues with artists, curators and other art contributors. She has a Masters degree in International Prospective from Paris V University.